"Like a cinder block to the jaw or an impending meteor strike, the blank stare of the Hauler Custom speaks the universal language of pitiless strength."
―Warstock Cache & Carry, MOC cab description.

The JoBuilt Hauler Custom is an armored semi-truck featured in Grand Theft Auto Online as part of the Gunrunning update.

The vehicle assumes the body design of the regular Hauler, but with an enlarged cabin and various heavy modifications. The vehicle's main form of armor is the large razor-sharp grille guard that sports numerous spikes along the bottom, a criss-cross designed grille shield and bolts around the sides attaching it to the bodywork. The front windows are also guarded with slits, while the sides appear to be equipped with more armor padding. The wheel rims are equipped with some sort of spikes placed over the bolts.

The entirety of the design is heavily based on the Goliath from the 1982 TV series Knight Rider, with detailings and purpose reminiscent of the UniSol truck used in the 1992 film Universal Soldier (barred windows, similar angled roof with two lamps and slanted details on the sides).

It is one of the vehicles available to tow the Mobile Operations Center.

The Hauler Custom is vastly quicker than most of the vehicles in the commercial class. It has great acceleration, comparable to that of the Phantom Wedge, being able to go from a standstill to approaching top speed very quickly. Compared to the Phantom Custom, the performance is identical (with or without the corresponding Mobile Operations Center).

However, the truck lacks traction on the back wheels, making the truck drift around corners. This is also a problem when attempting to take the truck off road, as the truck will wheelspin if the terrain is too steep. The brakes of the vehicle are somewhat lacking compared to other performance stats of the truck. When going on a downhill, the truck may take too much distance to stop, therefore it is advised to take great care when going downhill with the Mobile Operations Center attached.

The Hauler has no visible engine model due to its cab-over body design. The engine sound is very different from other trucks and is shared with that of the Phantom Custom, being a low-revving diesel engine.

As with the Phantom Custom, it is incredibly durable (about 12 rocket impacts before it explodes) and offers a temporary protection to the cab occupants thanks to its bulletproof glass (about 15 bullets before it is shattered, except if the enemy player is using FMJ rounds). It also has a stronger chassis, allowing to withstand collisions without a serious deformation thanks to its front armor.

The Hauler Custom can only be modified at a bunker vehicle workshop, along with the Mobile Operations Center.

When purchased, the Hauler Custom comes painted in the following colors by default: 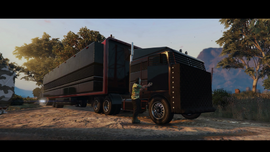 The Hauler Custom in a pre-release trailer. 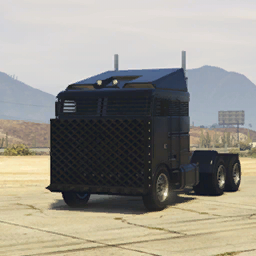 Retrieved from "https://gta.fandom.com/wiki/Hauler_Custom?oldid=1184297"
Community content is available under CC-BY-SA unless otherwise noted.