“Like a cinder block to the jaw or an impending meteor strike, the blank stare of the Hauler Custom speaks the universal language of pitiless strength.”

The JoBuilt Hauler Custom is an armored semi-truck featured in Grand Theft Auto Online as part of the Gunrunning update.

The Hauler Custom is heavily based on Goliath (a modified Peterbilt 352 Pacemaker) from the 1982 TV series Knight Rider, seen in the overall shape and the front grille guard. It also takes design cues from the UniSol truck used in the 1992 film Universal Soldier, mainly for the barred windows, sloped roof and ridged details on the sides.

The Hauler Custom is a customizable variant of the Hauler, which retains the general layout from the regular version. However, it features a large razor-sharp grille guard that sports numerous spikes along the bottom, a criss-cross designed grille shield and bolts around the sides attaching it to the bodywork, while the actual front of the truck is more of less identical to the Hauler, only with smaller headlights and no turning signals.

The cabin of the truck is longer in appearance and features various storage compartments on the rearmost sides, as well as ladder-style steps and grab handles for access. On the upper area, the windows are protected by black horizontal frames, while ridged details can be seen next to the door windows. The roof has a sloped air deflector with open sections on the front, and two circular auxiliary lamps (though they do not function).

The rear section is largely the same as the Hauler and many industrial trucks, having the corresponding fifth-wheel, large fuel tanks on the sides, curved mudguards in front of the rear wheels and the same square-shaped rear end, with the license plate on the center and the mudflaps on the outer sides. The Hauler Custom shares the tail light arrangement with the Hauler, the Packer and the Phantom, including reverse lights, main lights and brake lights. Like many other cars and trucks in GTA V, the turning signals are part of the rear lights, therefore appearing to be slightly orange. Behind the cabin, there is the same upper ridged details as on the sides, as well as the large exhaust stacks.

The primary color of the truck is applied on the cabin, the fuel tanks and the front mudguards of the rear section, while the secondary color is applied on the supports of the window bars, the side steps and grab handles, the support frames of the rear-view mirrors, the upper frames on the sides of the cabin, the handles of the storage compartments, the outer details of the exhaust heat shields, the straps of the fuel tanks and the rear end. It uses the same wheel design as the Hauler and many industrial vehicles, but has spiked details in place of the regular bolt details. 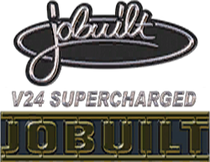 The Hauler Custom is vastly quicker than most of the vehicles in the commercial class. It has great acceleration, comparable to that of the Phantom Wedge, being able to go from a standstill to approaching top speed very quickly. However, the truck lacks traction on the back wheels, making the truck drift around corners and sometimes struggling to push other cars. This is also a problem when attempting to take the truck off road, as the truck will wheelspin if the terrain is too steep. The brakes of the vehicle are somewhat lacking compared to other performance stats, requiring long distances before stopping the vehicle completely. When going on a downhill, the truck may take too much distance to stop, therefore it is advised to take great care when going downhill with the Mobile Operations Center attached.

Overall, it performs similarly to the Phantom Custom, but has better steering capabilities due to the short wheelbase, at the cost of having limited traction and pushing capabilities. Due to the barred windows, the occupants are unable to use thrown weapons, such as Sticky Bombs and Proximity Mines.

The Hauler Custom has no visible engine model due to its cab-over body design. The engine sound is very different from other trucks, being a low-revving diesel engine also shared with the Phantom Custom.

As with the Phantom Custom, the vehicle is incredibly durable, able to take multiple explosions before being destroyed. The cabin also offers limited protection to the occupants thanks to its bullet-resistant windows, which can withstand up to 15 rounds from most firearms before being shattered. The truck also has a strong body, meaning it can withstand several collisions with virtually no deformation.

The Hauler Custom can take the following:

The Hauler Custom can only be modified at a bunker vehicle workshop, along with the Mobile Operations Center.

When purchased, the Hauler Custom comes painted in the following colors by default:

The Hauler Custom in a pre-release trailer.

The Hauler Custom on the updated Rockstar Games Social Club. 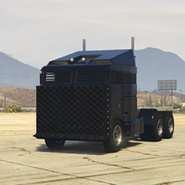