Reaching Rank 1.
Playing as a VIP/CEO

In-game time
“Collect a trailer and deliver it to the drop-off location.”

Haulage is a CEO/VIP Work mission featured in Grand Theft Auto Online as part of the Further Adventures in Finance and Felony update, released on June 7, 2016.

“We need you to take care of some delicate cargo for one of our exporters. Take possession of the goods and get them to the drop off in one piece. This is a valuable contract, so expect competition.”

When Haulage is started, the organization must go to a semi-random location where a Trailer is parked

and a Phantom provided to haul it; however, the player can use any acceptable truck cab to tow the trailer. The truck cab at each location will be a matte-black Phantom, which can tolerate more explosive damage than its regular appearance, has a stronger axle to avoid crumpling, and has bulletproof tires. Passengers of the truck cannot be locked onto from other players. At each location, a dark red Technical will also be on site, which also has bulletproof tires. It can be used by any Associate or Bodyguard to assist the driver of the truck.

When the trailer is connected to the trailer, it must be transported and delivered to another location far away. A successful delivery will reward the CEO/VIP and all associates with cash and RP.

for the player to obtain and use, which roughly follow the route to the destination; however, any truck cab capable of towing can be used. The trailer itself is indestructible to fire, collision and explosives, and if it becomes turned over or otherwise difficult to obtain, it will be relocated to a suitable position. The mission will fail if the trailer become fully submerged in water. Once the trailer is delivered, the player is forced out of the truck and the mission is completed.

Vehicles which can tow the trailer are:

The trailer can be:

It should be noted that the player must use truck cabs and cannot use the Cargobob's grappling hook to transport the trailer, as the trailer will become disconnected seconds after connecting.

Traffic on the main highways, such as the Great Ocean Highway, is greatly reduced during delivery, to the point where only one or two cars are onscreen. A regular flow of traffic will begin to spawn immediately after delivery.

“Organization have started Haulage. Steal the trailer and deliver it to the drop-off to earn cash and RP.”

Other players are alerted of the Organization's activities once the trailer has been connected. At this point, the trailer becomes visible on the radar

along with the same available truck cabs

around the map. They are instructed to steal the trailer and deliver it to the drop-off location. They are able to kill the player by the means of weaponry or by exploding the truck cab, killing the driver. The truck cab can also be locked onto with homing rockets; however, the indestructible trailer may get in the way of the rocket.

There are nine possible trailer locations, one of which is randomly selected depending in which half of the map the mission is triggered:

nearby can be used to connect to the trailer and deliver it.
Other players in session have been alerted to your activities. These players can now come after the goods to earn cash and RP.
The truck cabs

around the map can connect to the trailer and be used to deliver it.
Additional truck cabs

around the map can also connect to the trailer and be used to deliver it.
Organization have started Haulage. Steal the trailer

and deliver it to the drop-off to earn cash and RP. 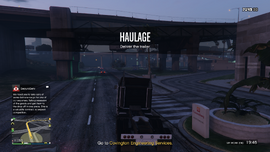 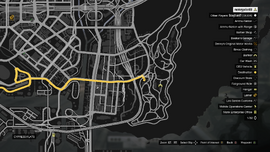 Trailer location on the map. 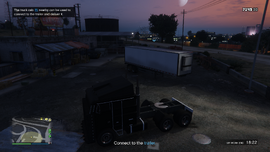 Connect to the trailer. 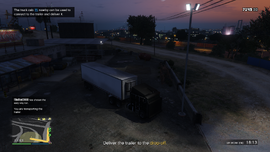 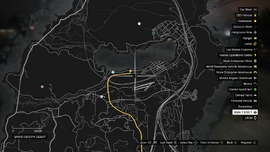 Drop-off location on the map. 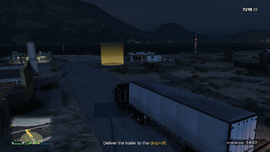 At the drop-off corona. 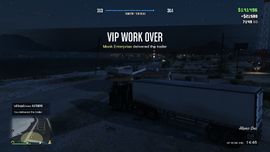 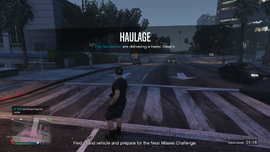 As a rival player outside of the Organization.