The Hatchet on the Rockstar Games Social Club website.

No
“Make kindling... of your pals with this easy to wield, easy to hide hatchet.”
— Ammu-Nation description.

“Add a good old-fashioned hatchet to your armory, and always have a back up for when ammo is hard to come by.”
— Social Club description.

The Hatchet is made up of a brown handle and a grey blade, and has a small red, black and white stripe on the handle, near the blade. Its appearance is similar to that of the Fire Axe's.

The Hatchet is a small, sharp melee weapon that is capable of dealing high damage (two hits to kill), similar to the Knife and the Antique Cavalry Dagger. Blood will appear on the blade of the Hatchet after hitting a pedestrian or other players.

The weapon can be used while riding motorcycles. 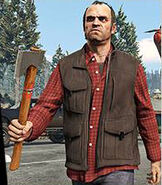