Not much is known about Harvey or his background, though a piece of information on Lester Crest's planning board mentions that Harvey once won a taco-eating contest by eating 52 tacos. He owns a red Vapid Stanier with the registration 83QSL722 and claims to work two jobs, one of which is at Sunset Bleach Cleaning Services.

Harvey Molina: "Who are you?"
Michael De Santa: "The guy with your best interests at heart."
―Harvey and Michael during Cleaning out the Bureau

Harvey's only appearance is during the mission Cleaning out the Bureau, where Michael De Santa and Lester Crest follow Harvey from the exit of the underground carpark to his apartment. Michael walks into Harvey's apartment and asks for Harvey's ID and cleaning overalls, offering him money on the job in order to gain access to the FIB Headquarters, which Harvey gives to him. Michael then leaves Harvey's apartment and Harvey does not appear again in the game. When seen on the planning board for the heist, with Michael's photo now on it, it is revealed the ID is for Sunset Bleach Cleaning Services.[1]

Harvey makes a minor appearance during the Nightlife Leak investigation mission Investigation: The Nightclub in The Contract update for Grand Theft Auto Online. He is still working for Sunset Bleach Cleaning Services by 2021. His company's cleaning van, containing uniforms, can be stolen to infiltrate the Triad Nightclub. Harvey is not directly targetable with weapons, although players can still kill him by other means. 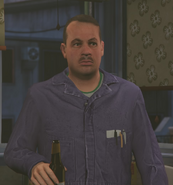 Harvey in the original version of Grand Theft Auto V.

Harvey in the parking lot smoking during Investigation: The Nightclub in Grand Theft Auto Online.