They are featured as pedestrians in the original Grand Theft Auto and then become a gang that Claude Speed can take missions from in Grand Theft Auto 2. Krishna's leader, Sunbeam, is one Claude's three potential contacts in the Industrial District. The Krishna are at war with The Zaibatsu Corporation and the Russian Mafia and hang out in Narayana, Maharishi and the Vedic Temple.

They are known to have problems with the Anywhere City Police Department, with Sunbeam tasking Claude to crush several of their cars at their car crushers. Next, Claude is asked to destroy the Zaibatsu Corporation's construction site, which he successfully does. In the next missions, Claude is tasked to kidnap Russian Mafia members so they can be converted into Hare Krishna members, lure out Russian assassins who are planning to kill the Grand Master and rescue several Krishnas who were kidnapped by Zaibatsus in order to test drugs on them. The last 2 missions involve Claude saving some more Hare Krishnas and destroying the Russian-owned Power Plant.

In return, the Krishnas are targeted by the Zaibatsu Corporation leader Uno Carb, who tasks Claude to steal their Jefferson. Later, an associate of the Krishnas is poisoned by Claude with hot dogs on their territory and 50 of their members are murdered by him in order to further increase gang violence between the Hare Krishna and the Russian Mafia.

The Russian Mafia leader Jerkov in turn asks Claude to kidnap Hare Krishna members via their Karma Bus and take them to a meat processing plant, where they are turned into hot dog meat which will be eaten by his troops. This mission only appears on the PS1, in other versions, it's regular pedestrians who have to be kidnapped. Jerkov is later targeted by the Krishna hitman Nova Bright, who is killed along with some of his hitmen by Speed. The last time they appear is during the mission Vedic Massacre!, during which Claude mercilessly murders hundreds of Hare Krishna members with Ivan's crew.

Karma Bus, the gang vehicle of the gang.

The Hare Krishna as they appear in GTA. 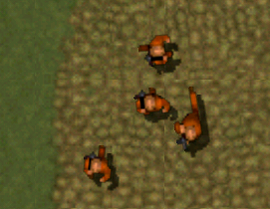