In-game time
“I’ve got some competition based at a construction site in La Puerta. If the head of the crew had an accident, maybe they won’t be so competitive, you get me? Go to the site, clap the dude, I’ll make it worth your while.”
— Description

Hard Labor is a mission in Grand Theft Auto Online given to the player by Gerald. It is available from 1-4 players.

The team must go to the La Puerta Apartments construction site in La Puerta. Once there, the team will have to eliminate the gang members who are protecting the Gang Boss.

The boss, however, escapes in a Maverick helicopter, which you can either pursue in the skies or on land. If choosing the latter, he will eventually land the Frogger at a beach in the Palomino Highlands. Once the boss is killed, the mission is completed. 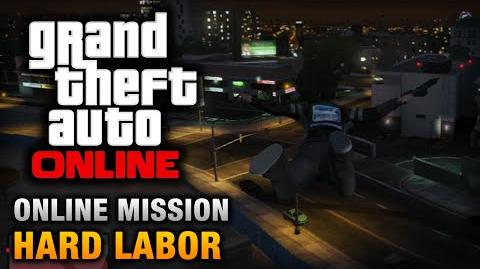