• ­Go to the harbor warehouse.

• ­Wait for Packie to get in the truck.

Have a Heart
Call and Collect

"Very funny. Maybe if being a drunkard doesn't work out you can be a comedian."
―Niko Bellic

Harboring a Grudge is a mission in Grand Theft Auto IV. It is the first mission given to Niko by Packie McReary.

During the initial cutscene, Niko is introduced to Packie's mother and younger sister respectively, Maureen McReary and Kate McReary, after a rough conversation, Packie tells Niko that they need to take care of some business out at the docks in Algonquin.

Some illegal meds are being smuggled into the country from the east by the Algonquin Triads, and he wants to steal the truckload of drugs while it's being moved. He says that a man named Ray Boccino asked him to steal the meds and deliver them to his lockup in Westminster, although he doesn't trust him, Packie decides that it's worth the money.

Drive Packie to the docks in Fishmarket North. Once the player arrives, follow Packie all the way to the top of the warehouse near the docks where the meds are being delivered. The game will introduce the player to climbing and shimmying as Niko and Packie scale the warehouse to access the roof. When the player reaches the top, a cutscene will follow, showing a boat pull up with the meds, which begins to get loaded into a Yankee truck. Packie will then instruct Niko to climb down the small mini-cabin on the side of the building next to the river and start shooting the Triads. The best course of action, is to start killing the Triads from the roof before climbing down the cabin, as the player will have a better field of vision and advantage from the top of the warehouse. Packie will also give the player support from the roof with his assault rifle and draw some of their attention, but they will still heavily shoot at the player.

When everyone outside has been killed (including the Triad on the boat), proceed to the warehouse where the truck is being held and watch out for more Triads hidden inside, two on each side of the truck. Be careful to not to damage the truck too much during the shootout. There will be a first aid kit in the office at the left if the player needs some health. After everyone is dead, enter the truck with the meds and wait for Packie. Packie will follow Niko into the truck, and instruct Niko to drive the truck to a lockup in Union Drive West, Westminster. When the plater starts driving to the lockup, some Triads in cars will start following and shooting at the truck. Niko will find a box full of grenades in the truck, and the player can drop them out the window to blow up the cars (Be careful; the truck is slow and it might not clear the blast radius if the player holds the grenade for too long). If the player cannot get there without the engine catching fire and the truck blowing up, they may choose to pull over and eliminate the Triads using the truck as cover.

Niko will park the truck in the lockup and the pair will exit the truck. Ray will pull up and pick up Packie to talk. He will also take Niko's number for more work.

"The bodies of several men have been found at the docks in Fishmarket South. Authorities believe they may have been members of a "triad" street gang smuggling contraband into Liberty City. Last year's prosecution of several members of the Dockworker's Union led to allegations of widespread corruption amongst the stevedores. A spokesperson for the National Office of Security Enforcement stated that the docks in Liberty City are the gateway through which the majority of drugs, sex slaves and counterfeit goods come into the United States, "It is only a matter of time before a terrorist smuggles a nuclear weapon through our docks. If the union do not clean their act up and agree to serious salary cuts and concessions, this is a very real danger.""

"City Councilor Doris Fung, long accused of having links with several Chinatown gangs made a statement to the press, "Those who died on the docks were the victims of this crime, not the perpetrators. We shouldn't be asking who they were working for, why they had weapons or why they were on the docks in the first place. We should be asking who killed these young men." Authorities are searching for two suspects, both white males." 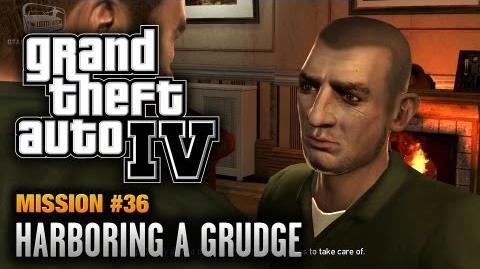 Retrieved from "https://gta.fandom.com/wiki/Harboring_a_Grudge?oldid=1257690"
Community content is available under CC-BY-SA unless otherwise noted.