It is advertised throughout the city on billboards with the slogan "Inflate Your Waist!", referencing the unhealthy fast food they serve. Happy Blimp seems to be a parody of the American Blimpie Sub Shops or the British Wimpy restaurant chain, the name of the burger shops refers to Blimpie and the logo and the food served refers to Wimpy.

Happy Blimp plays a part in a radio advert for the reality TV show Liberty City Survivor, a show where "20 recently paroled guys [are] equipped...with grenade launchers and flamethrowers and have to hunt each other down..."

In the advert, a fan says "I was grabbing a sandwich at the Happy Blimp, and suddenly two guys crash through the window and start shooting at each other. I was so excited, I didn't even notice I'd been hit! After that, I was hooked on Liberty City Survivor. I watch it every day in the hospital!"

The restaurant is most likely a parody of the real life fast-food chain Blimpie, based on the similarity in their names and logos.

The advertisement on the billboard. 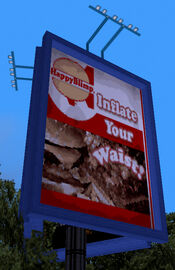 Retrieved from "https://gta.fandom.com/wiki/Happy_Blimp?oldid=1282950"
Community content is available under CC-BY-SA unless otherwise noted.