GTA Wiki
Register
Don't have an account?
Sign In
Advertisement
in: Side Missions, Races, Races in GTA V,
and 5 more
English

In-game time
“What would you say if I told you some fools I knew were running a little racing competition? And as luck would have it, they got this beautiful silver medal with your name on it.”

The first race is presented to the player by Hao, during the Strangers and Freaks mission, Shift Work. After completing the mission, a new race will be unlocked by a text message from Hao and Franklin must continue to win the races in order to proceed to the next one. There are a total of five races in the series, and are only accessible between 20:00 and 05:00 hours. Earning a medal in each of the Hao Street Races counts as 5 of the compulsory 42 Hobbies and Pastimes to achieve 100% Completion.

There is no entry fee for this race. It is two laps long and starts at Forum Drive in Chamberlain Hills against Hao and four other drivers. The reward for winning the race is $200. This race is triggered by meeting Hao for the first time in his Strangers and Freak mission and you must race him and four other racers.

It can be replayed through the Strangers and Freaks replay menu or by meeting the group of racers in Chamberlain Hills. If meeting the racers, the entry fee is $100 and the reward is $450 and Hao won't be taking part in the race. No 100% gold medal achievements can be completed this way, only through replay. If played through replay, the amount of money earned by winning the race won't be added to the player's account as he returns to the normal gameplay.

The entry fee is $500. The race is one lap long. It starts on Clinton Avenue in Downtown Vinewood and goes throughout the northern and western part of Los Santos. The reward for winning is $2250.

The entry fee is $1000. The race is two laps long. It starts near the terminal of Los Santos International Airport and goes throughout much of southern Los Santos. The reward for winning the race is $4500.

The entry fee is $1250. The race is two laps long. It focuses on freeways such as the Olympic Freeway and the Del Perro Freeway, but is a very short course focusing primarily on the on- and off-ramps. The prize for winning is $5625.

The entry fee is $1500. The race is two laps long and is for motorcycles only. It starts on Invention Court in Vespucci Canals, passing through the neighborhood of Vespucci and Del Perro. The reward for winning is $6750.

After winning all the races, Hao will call to congratulate the player.

The player can race a large majority of vehicles, however, certain vehicles will not be allowed to enter the races. A list of vehicles the player cannot race in is as follows:

Not much is known about this race other than it being a circuit race around the docks.

The Sea Races were originally part of this sequence (presumably for Franklin only) but on release were changed to be accessible to all protagonists like the Offroad Races.[2][3] 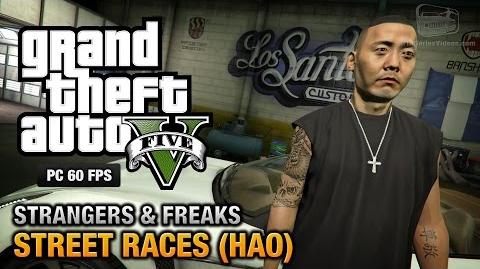