Custom Shop
“The PS5 and Xbox Series X|S versions of GTA Online also include the new Hao’s Special Works auto shop, located within the LS Car Meet, which will allow players to upgrade select vehicles (5 new vehicles and 5 existing vehicles at launch) for elite driving performance that takes full advantage of the upgraded power of new console hardware.”
— First announcement
“This new generation of GTA Online includes a range of new vehicles and a new addition to the Los Santos Car Meet: Hao’s Special Works.
Hao’s Special Works encompasses best-in-class vehicle upgrades, a new class of Races using specially modified vehicles, and a weekly rotation of Hao’s Special Works Time Trials, along with a Premium Test Ride, where you can get behind the wheel of these newly modified vehicles for free.”
— Follow-up detail

Hao's Special Works is a business in Grand Theft Auto Online introduced in the initial release of the Expanded & Enhanced Edition for PlayStation 5 and Xbox Series X|S.

Located inside the LS Car Meet and run by Hao, the business provides modification services and access to several exclusive features. It replaces the mod shop included in the previous-generation version of the LS Car Meet.

A custom auto shop allowing platform-exclusive "best-in-class" modifications to select vehicles. The workshop replaces the standard auto shop in the car meet space. Players enter the workshop from the Interaction Menu while sitting inside their Personal Vehicles.

Similarly to Benny's Original Motor Works, players need to convert their vehicle to an HSW-compatible version. When walking around the car meet, a laptop in the workshop area lists the vehicles available for HSW conversion with the "HSW Performance Upgrade".

Once a vehicle is converted, it becomes eligible for HSW custom options, performance and visual.

“Reckon your ride got what it takes to be an LSCM standard? Just leave it there, see if anyone takes it for a spin. Here's the deal: if they like it enough to pay for it, I'll make 'em an exact replica. Then next time you swing by, I'll give you fat comp for sending the work my way.”
— Hao's text message announcing the service.

Hao can supply an exact duplicate of the customization options of any* player-owned Personal Vehicles found in the LS Car Meet, paying a commission[vague] to the original owner. *Vehicle must be able to access the LS Car Meet (i.e. not be on the disallowed list).

A collection of 14 races for HSW-tuned vehicles only. Every track in this series is an identical duplicate of already existing Land Race tracks, such as Downtown Underground, Cutting Coroners, and Greenwich Meantime.

A Hao-modified ride that can be used on the Test Track parked at the test track end of the workshop space. 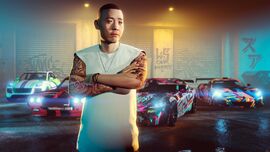 Initial teaser image featuring an Astron Custom, an Arbiter GT an S95 and a Cyclone II. 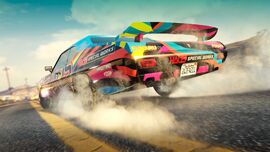 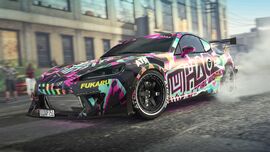 Another view of the S95. 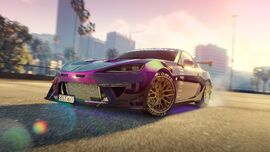 A "converted" S95 with chameleon paint.