Rob Yang (GTA V)
Rob Yang (GTA Online; LS Customs)
Unknown (GTA Online; LS Car Meet)
“What would you say if I told you some fools I knew were running a little racing competition? And as luck would have it, they got this beautiful silver medal with your name on it.”
— Hao to Franklin Clinton.
“Hey, have we met? I don't know, everyone looks familiar to me, especially if I clocked 'em in my rearview.”
— Hao to the GTA Online Protagonist.

Hao is a resident of Los Santos, who is involved with races throughout the city. He is familiar with both Lamar Davis and Franklin Clinton, and appears to be associated with The Families.

In Grand Theft Auto Online, Hao makes a brief appearance delivering a vehicle for the player to race against Lamar. He also works as the mechanic for the Los Santos Customs shop near Los Santos International Airport.

In Grand Theft Auto V, Hao challenges Franklin to a street race against him and his friends. Following the race, the player can join four more street races around the city. He also has a brief appearance during the mission Father/Son, when Franklin takes Amanda De Santa's car to Los Santos Customs. Here, Hao fixes Amanda's car.

Hao: "And then I told him... "I'm sure they got a really beautiful silver medal with your name on it"."
Mimi: "Weren't that the race you won, like, third in?"
Hao: "Girl? If I'd known you was watching, I'd a smoked all 'em fools."
—Hao and Mimi in the LS Car Meet introduction cutscene.

Hao appears in the LS Car Meet opening cutscene of the GTA Online: Los Santos Tuners update. He is having a conversation with Mimi, boasting about his "silver medal" conversation with Franklin, where Mimi claims Hao actually finished third, when the player approaches and interrupts. Hao provides the initial in-depth introduction to the Car Meet. He also sends the player a message when he unlocks the Pursuit Series races at Car Meet Reputation level 5.

He can often be found attending the meets looking at the cars, while his updated orange Penumbra will be found parked in one of the spots. 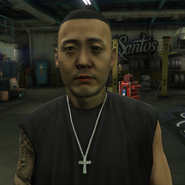