Hangars are huge aircraft storage facilities. They may be customized with several additions, similar to Underground Bunkers, Motorcycle Clubhouses and CEO Offices.

"Hello there.
You ever think that something's, like, missing from your life?
And I don't mean just that your wife ran off, or that your best friend is too good for you.
Maybe it's that you're not running an air-freight operation out of your very own hangar.
Go to Maze Bank Foreclosures and get one and I'll be in touch.

"Hey, it's Ron... Jakowski... from Sandy Shores...
Look, I've got an opportunity... don't hang up... seriously... no, this is interesting...
What says interesting opportunity like endless blue skies?
If you buy a hangar on Maze Bank Foreclosures, we can build an air-freight business together... that's right, finally we can earn some air miles that are worth something. Ha!"
— Alternate call

"Hey, uh, I can't say too much, because they're listening... but there's more to those hangars on Maze Bank Foreclosures than you might realize.
You buy one, you buy me... well, I mean, you buy a partnership with me.
We'll go in together on the air-freight business. Now, how's that sound, huh?
Hello? Hello? You there? Oh goddammit! I hate cold calling."
— Alternate call

There are five hangars available to purchase from Maze Bank Foreclosures.

Once a hangar is purchased, an introduction cutscene is played upon first entry. The protagonist discovers two corpses near an unoccupied Cuban 800. Ron Jakowski, using an intercom speaker in the hangar, warns the player that he has a space weapon (Russian). The protagonist eventually finds him behind a stack of boxes, speaking through a microphone and watching through a small CCTV monitor. Ron gets scared of the protagonist, before realizing that it is his new partner. Ron describes how he is alone and was supposed to be protected forever by his best friend who has "gone Vinewood" on him. He thinks he has screwed up by shooting two (assumed) government agents in the head. Eventually, Charlie Reed, the mechanic, appears from a room of the hangar with a Burger Shot bag and a thermos flask in his hands, and he is briefly introduced by Ron and is immediately sent back to work. From there, Ron make a full tour of the hangar with the player, explaining how the facility works, showing the office, the living quarters (if purchased), the supply storage and the mechanic, who is able to modify aircraft. After the tour, both Ron and the player load the corpses into Ron's plane, while he states he will be in touch with the player once they start the business after taking care of some radio work.

The office provides the player with access to Free Trade Shipping Co to run their smuggling business. However the player can simply use the hangar and workshop to store and modify aircraft without undertaking any smuggling operations.

If the player has purchased a hangar at Fort Zancudo, then they receive low-level access pass clearance into the base, whereby they will be allowed to drive or fly into the base without incurring a wanted level. Additionally, all members of Organizations or Motorcycle Clubs will receive the clearance if the CEO or President owns a Zancudo hangar, though it will be revoked if the player leaves or are removed from the MC or Organization.

A complimentary Cuban 800 is supplied with every hangar.

Existing owned (Pegasus) aircraft can be converted to Personal Aircraft by ordering them from Pegasus and parking them in the hangar. They can then be personalized (resprayed).

Ownership of a hangar provides the player with an additional Interaction Menu option to call a personal aircraft from their hangar (floor or storage), in addition to any personal vehicle, CEO or MC Club vehicle or Pegasus vehicles they may already have active. Personal Aircraft deliveries are not instantaneous and are subject to mechanic delivery cool-downs. Personal Aircraft may spawn on open areas and different from Pegasus ones.

Personal Aircraft are automatically insured by Mors Mutual Insurance and when destroyed, can be claimed back, subject to a $1,000 deductible.

Below is a list of every available aircraft that the player can store in their hangar. At the rear of the hangar is a Personal Aircraft Management menu, which can be used to move and display the aircraft on the floor of the hangar and move them to and from an unseen storage location.

Aircraft are classified as small, medium, large or extra large and this classification dictates how many can be stored on the floor of the hangar. There is on-floor capacity for twelve small, five medium, two large and one extra large aircraft, or various combinations of sizes (except for the extra large category). Attempting to bring in a new aircraft with no spare parking on the floor for that size will move it to storage immediately. Hangar capacity including the unseen storage facility is 20 total aircraft, regardless of their size.

* Denotes aircraft that are excluded from Pegasus Lifestyle Management and can only be purchased by Hangar owners. 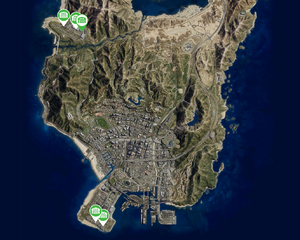 Corona outside the hangar.

Left section of the hangar.

Right section of the hangar.

Charlie working on a Havok helicopter.

A large crane inside the hangar.

Pre-release screenshot of a hangar interior.

Map with a CEO vehicle (aircraft), a Pegasus delivered aircraft and a Personal Aircraft spawned near the player.
Add a photo to this gallery
Retrieved from "https://gta.fandom.com/wiki/Hangars?oldid=1285265"
Community content is available under CC-BY-SA unless otherwise noted.