The Hammer on the Rockstar Games Social Club website.

Wikipedia has an article on:
Hammer

The Hammer was removed from both Grand Theft Auto: San Andreas and Grand Theft Auto IV while it was in development; it can be still seen a few times in GTA IV in the hands of construction workers and inside a few buildings, but it cannot be used. [citation/verification needed]

“All steel construction, full polish tool with head and handle forged in one piece.”

The Hammer in Grand Theft Auto: Vice City has a red/black handle with a grey head. Tommy Vercetti will wield and use it in a similar manner to the Baseball Bat and the Nightstick.

The weapon is used in a similar way to most club-type weapons like the Crowbar, being wielded with a single hand.

The Hammer has a short range but deals a good amount of damage, causing the person being attacked to collapse.

The Hammer is fairly powerful, being comparable to the Crowbar, but it can be swung much faster and the longer range allows the player (if timed right) to hit a sprinting person, which makes it useful in a number of scenarios. If swung from the correct range, the Hammer may connect with the victim's face, knocking them out instantly or even killing them. It is also capable of denting and removing parts of vehicles, and, if swung enough times, has the ability to damage a vehicle to the point of it igniting.

Being a single-handed weapon, it can be used while on a motorcycle, albeit only in Grand Theft Auto Online. 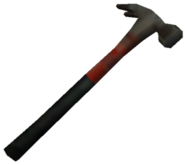 Model of the hammer cut from GTA IV.

The Hammer, along with the Screwdriver and the MP5, are the only weapons that do not have a spawn point in the city and have to be purchased.