• ­Go to the Half-track location.

• ­Go to a ladder at the Half-track location.

• ­Deliver the Half-track to the drop off.

• ­Help deliver the Half-track to the drop off.

Out of lives.
Half-tracks destroyed.

"Infiltrate enemy agent base of ops and limit their power by securing a Weaponized Half-track from their fleet. Vehicle to be returned to friendlies."
―Description

Half-track Bully is a Mobile Operations mission featured in Grand Theft Auto Online as part of the Gunrunning update.

The team starts on the Los Santos River in Cypress Flats and Agent 14 orders them to get into the provided Dinghy. He briefs that a special clearance US Military equipment is in the hands of an enemy group. They have to move to a storage area in Banning and staying in there. While waiting, Agent 14 tells to the team that they will look through a hacked security system that provides a clearer view of the objectives, denoting the approach to the vehicles.

Once the camera view ends, the team can proceed to take out the enemies and approaching to the targeted vehicles. When a player is close to a Half-track, Agent 14 informs that they have to gain entry by hacking the vehicle's doors with the SecuroServ hacking app. As soon as a player hacks the vehicles, the alarm will trigger and enemies will start attacking the team. The other players have to provide defense to the player that is hacking the vehicles, as they must stay within range to progress. Once the hack is complete, the doors are unlocked and Agent 14 orders the team to retrieve the vehicle, without, of course, warning that the enemies will pursue.

When the team leaves the storage area, the enemies will block the western side of Autopia Parkway with black Grangers and a Valkyrie appears, so the team have to take the dirt road leading to Dutch London Street. As the team gets into the upper street, two Buzzard Attack Choppers appears, one near the Maze Bank Arena and another in the western side of the road. When approaching the nearest intersection, a black Fugitive joins to attack the team and another spawns on the other side of the street, while another Buzzard appears. From the intersection with Jamestown Street, another Fugitive spawns and another Valkyrie joins. As the team takes the turn, two more Buzzards appears and a roadblock of black Grangers is set before crossing the bridge. From the other side of the same bridge, another Fugitive spawns and other two spawns near the intersection with Orchardville Avenue. Another Fugitive spawns coming from the east and stopping in the intersection with South Shambles Street.

Once the team reaches to Murrieta Oil Field, all pursuers will desist to chase the team, so they can reach to the drop off point. There will be agents awaiting with two Patriots inside. If the vehicles are delivered, the mission ends. 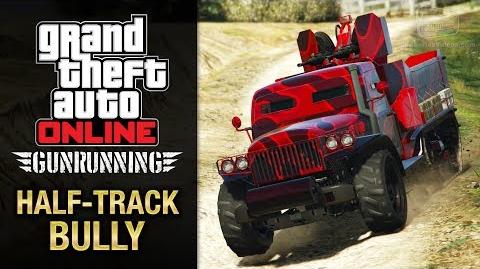 Retrieved from "https://gta.fandom.com/wiki/Half-track_Bully?oldid=1104071"
Community content is available under CC-BY-SA unless otherwise noted.