Wikipedia has an article on:
Half-track

“The Half-track might look like it's having a really dangerous identity crisis, but trust us, it works. The all-terrain capabilities of a tank, with all the advantages of a truck: straightforward handling, a spacious, prostitute-friendly cabin, and lots of fresh air for the lunatic on the .50 cal in the back.”
— Warstock Cache & Carry description.

The Bravado Half-track is a military truck featured in Grand Theft Auto Online as part of the Gunrunning update.

The truck appears to be inspired by the M3 Half-track due to the rear tracks, with the armored cab options reminiscent of the cab armors often used in half-tracks like the Sd.Kfz. 7.

The vehicle is essentially a half-track and armed variant of the Duneloader, where the front section retains the same cabin design and features from the regular Duneloader, but adds what appears to be an unditching roller (albeit non-functional). The rear section, however, uses a larger truck bed with tall walls around, carrying several items on the sides and behind the cabin. The rear end features an unusable door on the center, a set of virvular tail lights derived from the Duneloader and several semi-trucks, and a tow hitch on the back that allows it to tow another player's Anti-Aircraft Trailer.

The bodywork and turret are painted with a primary color, while the unditching roller, fenders, bottom side, wheels and track wheels are painted with a secondary color. The front section retains the same wheels as the regular Duneloader, but the rear one uses continuous tracks, each one consisting of a front drive sprocket, a rear idler wheel and a return roller. Four road wheels are supported by pivoting arms that are sprung with vertical volute springs mounted in a center box housing, allowing the vehicle to drive smoothly over uneven terrain. A differential provides connection between the engine driveshaft and the drive sprockets.

Although the Half-track possess average top speed due to its weight and the tracks, it has great acceleration and good mobility, allowing to move quicker than its standard version. The tracks provide great traction on any surface, allowing the vehicle to climb very steep hills with ease, even nearly vertical hills when going in a straight line. Its handling is also great, despite being a bit larger than its normal version, possibly due to the limited top speed.

Not only is the Half-track great at handling off-road conditions, it can also tolerate deep water. While not amphibious, the Half-track can be submerged up until the snorkel on the left side of the cab is drowned. This is because exhausts in GTA V determine when the vehicle should cut out under water, and the Half-track's snorkel is considered an exhaust by the game - moreover, small amounts of exhaust fumes can be seen coming out of the snorkel. Since the snorkel ("exhaust") is raised above the cab, the player can drive the Half-track underwater so long as the tip of the snorkel remains above the water surface. This trait is shared with its standard variant, the Duneloader.

Like the Duneloader, the Half-track is powered by a diesel engine which, due to the low texture details, does not reveal its exact configuration. The engine is coupled to a 4-speed gearbox in a front engine, rear-wheel drive layout. Its engine sound is shared with that of the APC.

The Half-track has great tolerance against gunfire and explosions, almost on par with the APC. The gunner is also safe from the front thanks to the turret shields and the bed walls, and they are able to attack enemies with little to no risk of being shot. However, one should be careful when dealing with multiple enemies, as one can be easily shot from other angles and from a higher level than the vehicle. A major disadvantage of the Half-track compared to most turreted vehicles is that the gunner does not have protection against explosives, making it easy to disarm.

The Half-track can be equipped with additional Armor Plating that will primarily affect the windows. Adding any Armor Plating will take away the ability for occupants to use throwable weapons, and the Heavy Armor Plating upgrade removes the occupants' ability to use any drive-by weapon. Strangely, even if no Armor Plating is installed, the windshield is completely bulletproof, in a similar way to the Police Transporter and the Police Riot. The side windows, however, do not provide any protection, even with Armor Plating installed.

The Half-track is equipped with a turret on the back that can be used by another player, offering a 360 degree coverage and a maximum upper elevation angle of 35 degrees. It should be noted that both guns have increased damage over vehicles, with a ×1.5 multiplier.

Towing an Anti-Aircraft Trailer in collaboration with another player gives the vehicle increased potential, as the trailer turret can provide additional defense when the main vehicle is supressing enemies. Caution should be taken when carrying the AA trailer, as it is possible to trigger a proximity mine that the Half-track has placed, destroying the trailer. The lack of armor often makes the trailer the first vehicle to lose during a combat.

The Half-track can only be modified at a Vehicle Workshop inside a Mobile Operations Center or Avenger.

The truck entering a bunker.

The Half-track truck seen at the top left, behind a Phantom Custom with a MOC unit. A Dune FAV, Weaponized Tampa and APC are seen around the truck.

The rear section seen in the official Gunrunning Trailer.

A view of the truck in the trailer.

The Half-track with the custom 20mm Autocannons.

Close up of the optional 20mm Autocannons. 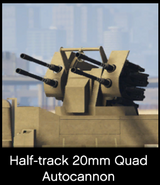 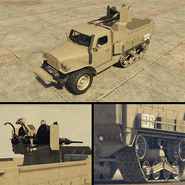 The Half-track on Warstock Cache & Carry.

The Half-track on the updated Rockstar Games Social Club.

The Half-track in the cinematic preview on Rockstar Games Social Club. 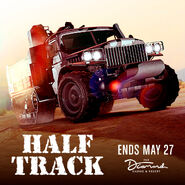