GTA Wiki
Register
Don't have an account?
Sign In
Advertisement
in: Pages with non-numeric formatnum arguments, Vehicles, Vehicles in The Lost and Damned,
and 12 more
English

TLAD
TBOGT (See #Trivia)
“This super-fast sports bike can take you from zero to permanent vegetative state in under two and a half seconds. It's not a question of if this bike will kill you, but when, so pay up, and live dangerously”
— Southern San Andreas Super Autos description.

The Shitzu Hakuchou (Japanese: ハクチョウ) is a sports bike featured in The Lost and Damned, The Ballad of Gay Tony, Grand Theft Auto V, and Grand Theft Auto Online as part of the Last Team Standing Update.

“The grand tourer to top them all! Able to blaze coast to coast with ease thanks to its 1300cc monster. 200bhp "bullet train" engine and wind tunnel developed bodywork this bike is the one to choose!! The Hakuchou is a King mother fucking missile. Twisties might tie this bitch in a knot though. Keep it straight lining on this beast.”
— Uptown Riders description.
“Fuck if I could pronounce it,﻿ but a "Ha-Ha-Coochie-koo" is now in your possession, Angus.”
— Johnny Klebitz.

The Hakuchou is mainly based on the 2008–present Suzuki Hayabusa, while the headlights and rear seats appear to be inspired by those of the 1996-2007 Honda CBR1100XX Super Blackbird. The Hakuchou also features the Kanji letter 死 (meaning "death" in Japanese) on both sides of the body, in a similar manner to the Hayabusa's Kanji lettering 隼.

Described as "a grand tourer to top them all" with "wind tunnel developed bodywork", the Hakuchou is distinguished by its more aerodynamic profile compared to the Bati 800 and the Double T, where the front section features a large front mudguard attached to the fork legs, while the upper area is occupied by the front fairing with a triangle-shaped headlamps, "SHITZU" marking above the lamp and a long glass visor. The portions beside the centre are occupied by thin vertical intakes next to the mudguards, triangular amber indicators and triangular mirror wings on top of the fairing. The area inside the fairing is mostly finished in carbon fibre and houses two analog dials, while the upper clamp/plate holds two independent handlebars.

The rear area is occupied by a black seat with room for two occupants, a small red tail lamp on the rear end and a plate holder below, with the corresponding license plate and amber indicators. The rear wheel is connected to the rest of the bike by a dual-sided swing-arm finished in silver/chrome, having a single suspension spring and the corresponding chain drive and sprocket on the left. There are foot pegs for both occupants and silver/chrome exhaust tubes with carbon-fibre finish on the wide portions.

The bike is mostly painted with a primary colour on the front mudguard, fairing, mirror wings, fuel tank and rear section, while the secondary colour is applied on the frontal portion of the fairing, in the form of dual stripes on the sides, the lower fairing and the rims. It uses five-spoke dual rims and medium-profile tyres, with the rear one being wider.

The Hakuchou returns with the same design as the Episodes from Liberty City rendition, albeit with updated light textures. In the enhanced version, it uses the same "Sports Bike" dial set as motorcycles such as the PCJ-600 and the Akuma.

Colour distribution is the same, where the primary colour is applied on the front mudguard, fairing, mirror wings, fuel tank and rear section, while the secondary colour is applied on the frontal portion of the fairing, in the form of dual stripes on the sides, the lower fairing and the rims. Even though files list the bike with either default alloy or red wheel colour, they are not applied on the rims at all due to the secondary paint, and will only be shown on custom rims. It also retains the same five-spoke dual rim design. 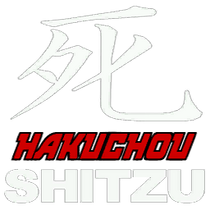 The Hakuchou is a very well performing motorcycle with excellent speed and acceleration. The bike immediately gains speed thanks to its powerful engine, and good traction results in no loss of control when accelerating in a straight line. The bike leans very well thanks to its light weight, but tends to lose control when cornering at high speeds. The bike is also very good at "drifting", somewhat too much, causing the bike to lose control. Although the turning radius is quite high, it still manages to oversteer, and cornering into 2-lane roads often requires the player to slow the bike down significantly to avoid this oversteer.

The Hakuchou is stated by the Uptown Riders website to use a 1300cc (1.3L) engine pushing 200bph, yet the in-game model is not very clear to define. It sports a 5-speed gearbox and a high-revving engine, appearing to be a higher-pitched and heavily-edited variation of the one used on the PCJ-600.

The Hakuchou is a power-house motorcycle with a beefy body shell that contains a strong, powerful engine. It is more powerful than the Bati 801, and bears a longer wheelbase compared to other sport bikes. The bike can, however, be misleading for inexperienced drivers, as its steadiness and bulkiness implies superior crash resistance compared to other bikes, when in actual fact it is the same as some much lighter ones.

While the Hakuchou's acceleration is unremarkable without upgrades, its top speed is one of the its most defining traits, being able to keep up with the Akuma and outrun the Bati 801 on the straights. The Hakuchou's top speed can be boosted even further by its excellent ability to peform wheelies at top speed, increasing its already impressive velocity by a noticeable margin. The handling is, however, the achilles' heel of this motorcycle, as its long wheelbase means that the Hakuchou possesses a wide turning circle and, when combined with its 250kg weight, leaves a lot to be desired in terms of response when turning. As such, the Hakuchou is a good choice for someone that values speed over handling, or for highway riding because of its straight line power.

While one is able to go considerably faster than normal top speed while doing a wheelie, one can also push forward on the left thumb stick (controller), also known as "Leaning Forward," which also greatly increases acceleration. However, while leaning forward on the Hakuchou, it is more difficult to make minor steering adjustments.

Again, the Hakuchou sports an engine whose model is not clear to define, and is coupled to a 6-speed gearbox. It uses the same engine sound as the Akuma and the Double T. 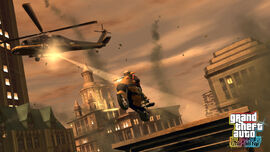 A pre-release screenshot showing Luis Lopez escaping on a Hakuchou. 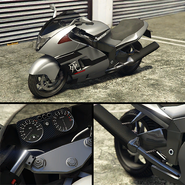 The Hakuchou on the updated Rockstar Games Social Club.

The Hakuchou in a cinematic preview on Rockstar Games Social Club.

The Hakuchou in a cinematic preview on Rockstar Games Social Club.