21:00
“The FIB is using a lockup on Clinton Avenue to score some prototype vehicles equipped with new tech so siphon private data from home wifi networks (copied from Eyefind cars). They're watching us, I'm watching them. Can you pay them a visit and snatch their new toys? Word of warning - you'll have to hack the terminal to get into the lockup which is going to raise some bells. Expect a lot of heat.”
— Description

Hack and Dash is a mission in Grand Theft Auto Online given to the player by Lester Crest. It is available for up to 4 players.

Lester is in need of two FIB vehicles, a FIB Buffalo and a FIB Granger. Those two cars are hidden in a FIB compound on Clinton Avenue in West Vinewood. One player needs to hack the terminal to open the garage where the cars are parked. Once the player begins hacking, the team will receive a 3-star wanted level and the rest of the players need to keep the hacker player covered. After the terminal is hacked, the team needs to evade the wanted level and then, deliver the cars to Lester's warehouse in Murrieta Heights. 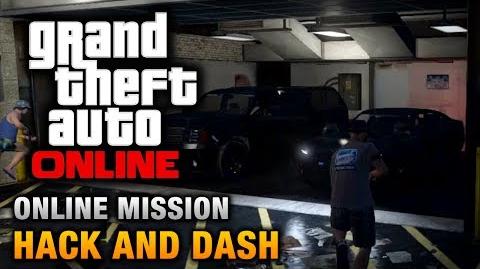