GTA IV
“Do you hate your family and your job? Are you remortgaged up to your nipples? The last time you ate Mexican food did it give you IBS? If so, then our statistics suggest you're overwhelmingly likely to buy a sensible four-door family SUV with a vaguely peppy name. And here it is.”
— Southern San Andreas Super Autos description.

The Habanero appears to be based primarily on the 2003-2008 Lexus RX (XU30) (a rebadge of the Japanese Toyota Harrier), but it is slightly bulkier and sits lower to the ground. Noticeable differences from the RX are the front turn signal location (bottom edge as opposed to top corners), rear license plate location (bumper as opposed to trunk lid), and the tail light clusters (red as opposed to silver). The tail light clusters and their arrangements are influenced by those of the 2007-2012 Citroën C-Crosser, which in turn is a French rebadge of the second generation Mitsubishi Outlander.

The Habanero assumes a rather long body with ample room for four occupants, where the front bumper features a wide open intake and a flat section on the center intended for the license plate, while the upper area houses a silver chrome grille with numerous horizontal dividers and the manufacturer emblem. The sections beside the grille house large silver housings with black trimming around, each one having dual circular main lamps on the upper side and rectangle-shaped turning signals below. The bonnet area features a slightly bulged profile starting from around the grille and curves towards either side of the windscreen.

The sides of the car are defined by the protruding arches, the bottom steps and the rectangular details on the doors, as well as the body lines starting from beside each headlight and going towards the outermost side of the tail lights, passing between the silver/chrome horizontal handles and the cabin windows. The same cabin makes use of black trim around each window pane and colored rear-view mirror wings near the A-pillars, while the roof area features black lines separating the panel from the rest of the car, a single aerial on the back section and a roof spoiler above the rear window. Silver "HABANERO" badges can be seen over the rectangular details of the front doors.

The rear of the car is predominated by the large compartment door, having a black panel below the window that bears the manufacturer emblem on the center, and silver lettering on the lower corners that display the names of the car and the manufacturer. The car uses sectioned tail lights beside the aforementioned black panel, with the outer ones having upper brake lights and lower turn signals and the inner ones the main red lights and lower reverse lights, placed directly at the rear compartment door. The bumper also has a flat central section for the license plate, while the area below it houses a black section with a wide meshed vent on the center and two circular exhaust pipes on the outer portions. The interior of the vehicle bears a likeness to that of the Imponte DF8-90, obviously altered for the trunk area.

The vehicle spawns in a variety of single-tone colors for the body and uses large 5-spoke wheels, fitted with medium-profile tires.

The Habanero is equipped with a GPS system with a male voice, but only if the player leaves the "selected cars" (default) option in the audio menu.

The Habanero assumes the same design as in GTA IV, but the rear quarter window is no longer kinked upwards as on the Lexus, but rather straightened to be similar to the 2009-2015 Toyota Venza. It also gains a mesh pattern on the front bumper intake (in a similar manner to the rear bumper), and has fewer separations on the grille, allowing the player to see the radiator. In the enhanced version, the car uses the same "Feroci" interior as vehicles like the Ingot and the Serrano.

Again, the car spawns in a variety of single-tone colors for the body, as well as the stitches of the interior. It also retains the same wheel design as before, being identical to the "Bippu" SUV wheels available in Los Santos Customs.

Borrowing its specifications from the Lexus RX, the Habanero focuses more on stability and luxury rather than performance, leaving acceleration below average, with a decent top speed. Although it sports an AWD configuration, off-roading in this vehicle leaves much to be desired, as sliding and spin-outs are common, and the ground clearance is minimal at best. Braking is below average, due in part to constant front wheel lockup. Handling at high speeds is fair, though the suspension does not perform as well as what would be expected. At slow speeds, it is far too soft leading to body roll, while at high speeds it is far too firm and unforgiving. Its durability also has much to be desired from a vehicle of its size, and the engine will begin smoking after about three to five severe frontal crashes. With this said, the Habanero is one of the least desirable vehicles to drive in GTA IV. It lacks the durability of trucks and certain other SUVs, as well as the speed of any sedan or two-door.

The Habanero is powered by a numb-feeling Inline-4 with a modeled Turbocharger, paired to a 5-speed gearbox in a front engine, all wheel drive configuration (50% front, 50% rear). It shares the mid-revving and smooth engine sound with vehicles like the Landstalker and the Rebla.

Again, the Habanero performs the same as in GTA IV, having almost the same performance. Top speed and handling is slightly increased, but it is still outclassed by most AWD vehicles and resistance is the same. The vehicle has a tendency to lift the inside wheels under high speed cornering.

The player may notice that the Habanero is fitted with a modeled Turbocharger by default (similar to vehicles like the Seminole, the Huntley S and the Dubsta 6x6), paired to a 5-speed gearbox in a front engine, all wheel drive configuration (40% front, 60% rear). It also has a mid-revving engine sound with an apparent supercharged whine, also shared with the Issi. 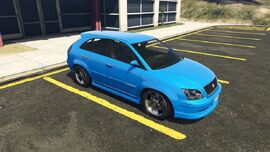 The Habanero on the updated Rockstar Games Social Club. 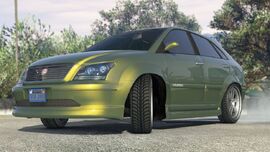 The Habanero in the cinematic preview on Rockstar Games Social Club. 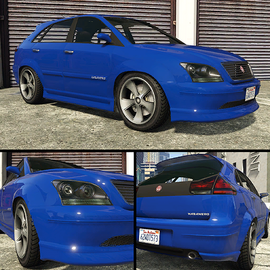