The HPV-1000 is a police motorcycle in Grand Theft Auto: San Andreas.

The HPV-1000 assumes a unique model that is not shared by another motorcycle, and bears resemblance to a police Kawasaki Kz1000.

Powered by a 4-cylinder engine, the HPV-1000 has average acceleration, but is considerably faster than most bikes (only below higher end models such as the FCR-900, PCJ-600 and NRG-500), although the player can fall off easily if they have minimal "bike skill".

It is one of the few bikes which have off/on-road tires, which means that its main advantage over other bikes is its versatility; while some bikes (Sanchez, Quadbike) out-perform it off-road, and others (FCR-900, Freeway) surpass it while street racing, it is still considerably good at both. With this characteristic, the HPV-1000 is capable of tackling the toughest of hills and roadways and is also very agile, though at higher speeds, one might have to resort to brake-turning.

If the Rhino or Hunter is not yet available, this bike is a good choice for completing the Vigilante side mission - mainly because the player can fire a submachine gun straight ahead or on both sides, allowing them to take out the opponent easily. Although its siren is no longer effective in prompting oncoming vehicles to move out of the way, its compact motorcycle design allows it to navigate around traffic far better than full-sized cars.

Overall, the HPV-1000 is a well balanced vehicle to use, as well as one of the few bikes available from the start of the game. 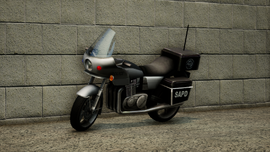 The HPV-1000 in the Definitive Edition (front). 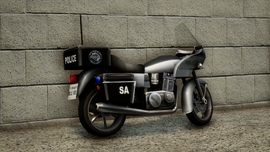 The HPV-1000 makes an important appearance in "Cop Wheels", in where protagonist Carl Johnson needs to steal four HPV-1000s in various places around Las Venturas for the heist and needs to deliver it to a moving Packer. During the mission, no HPV-1000 appear in traffic, forcing CJ to jack the scripted bikes. HPV-1000s also appear in the mission Reuniting the Families, chasing the gang's car. In the mission "Small Town Bank" CJ and Catalina flee from the bikes, but use them afterwards to reach the hideout.