The company sells men's suits, which the player can purchase in Grand Theft Auto Online at any clothing store. 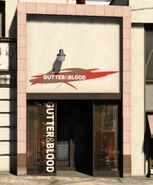 Strawberry Avenue, Textile City.
Add a photo to this gallery

The brand is a clear parody of Dolce & Gabbana aka D&G.

On the description of Gutter & Blood's suits, it is mentioned that they are "tax dodgers." This is an allusion to Dolce and Gabbana's tax evasions scandals.

The store on Rockford Drive is based on a building at 343 North Rodeo Drive which is home to a Prada store. Prada is represented in game as Enema which occupies a store next door on Rockford Drive. The Enema store is based on the real life D&G store at 312 North Rodeo Drive, so the game developers have placed these two buildings alongside one another and simply swapped their occupants. Their stores in Liberty City are also both located just around the corner from one another.

A 8F Drafter with a Gutter&Blood livery.
Add a photo to this gallery
Retrieved from "https://gta.fandom.com/wiki/Gutter_%26_Blood?oldid=1207162"
Community content is available under CC-BY-SA unless otherwise noted.