“Medium-duty commercial truck for heavy-duty consumers. Finally, it's a pick-up to go with your two gallon sodas and twenty piece buckets for once. And the ultra-powerful engine can haul you out your bedroom when you weigh in at three tonnes.”
— Southern San Andreas Super Autos description.

The Vapid Guardian is a heavy duty pick-up truck featured in Grand Theft Auto Online as part of the Heists Update.

The Guardian is mostly based on the 2004-present Ford F-650, as seen from the overall chassis of the vehicle. It takes certain styling cues from the Chevrolet Kodiak/GMC Topkick, such as the headlights, the hood, and smoke stacks. It also has a much larger version of the grille seen on the Speedo, which in turn is based on the 2003-present Chevrolet Express van.

The Guardian is characterized by its large size and tall profile, featuring a front end mostly dominated by the mesh grille with seven horizontal separations on it, with the middle one being wider and bearing the manufacturer badge on the center. The outer edges of the truck features dual square headlights and small turn signals, while the bottom side features a small bumper with rectangular open sections. The front compartment hinges from the front and features a small intake on the upper side, as well as bulky fenders.

The sides of the truck denote the bulky appearance, with a large cabin, black mirror wings, rear handle bars and large truck-style exhaust pipes fitted with heat shields around the same height as the cab. On the bottom side, a set of mudguards can be seen behind the wheels and a "Black Extended Fuel Tanks" options derived from the Sandking XL (albeit featuring bolted-on details around it and replacing the rear storage boxes with small ladder steps for the truck bed).

The rear of the vehicle consists of a truck bed with wide fenders, rear bumper, rectangle tail lights and an exposed section of the chassis. The tailgate bears the manufacturer emblem on the center and two toolboxes are seen on the bed, serving as the additional seats for the passengers.

The underside of the Guardian is unique, in that it features a driveshaft loop similar to the Liberator and Marshall, which protects the driveshaft from damage on its underside if was to fall off in the event of a U-joint (Universal Joint) failure, as in normal circumstances it would continue to spin in an aggressive rotation without the loop. It also has a set of impact struts and shock absorbers derived from the aforementioned monster trucks. Its interior uses the same digital dials as the Insurgent.

The primary color of the vehicle is applied on the body and the driveshaft loops, while the secondary color is applied on the grille, bumpers and extended fuel tanks. The wheels appear to be similar to the ones on the Bodhi, although featuring painted rims with grey centercaps.

The Guardian has excellent speed and maneuverability for such a heavy vehicle with its turbo diesel engine, 6-speed transmission and all-wheel-drive layout (35% front, 65% rear). Durability is reasonable against traffic collisions and gunshots, although fishtailing can be a problem at medium speeds. The Guardian may not be able to push certain cars out of the way, but with good speed and durability, that is considered unnecessary. The Guardian is also competent at off-roading, and its elevated ground clearance means that it can ford areas of shallow water without suffering from a decrease in speed. Any players that stand on the back of the vehicle won't fall off when the vehicle moves, allowing them to use any weapon.

Despite the engine appearing to be a 3-cylinder from the exterior, using the Rockstar Editor, if the player positions the camera inside the engine bay, an extra inlet and exhaust pipe on the manifolds can be found behind the wall column separating the interior from the engine bay, making the engine a 4-cylinder. It shares the same engine sound as vehicles like the Granger and the Bison.

A Guardian in the original version of GTA Online. (Rear quarter view) 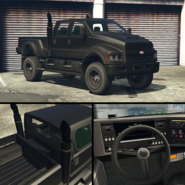 The Guardian on the updated Rockstar Games Social Club.

The Guardian in the cinematic preview on Rockstar Games Social Club. 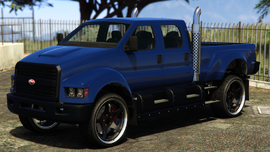 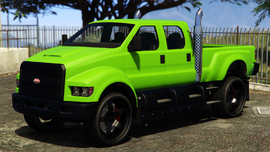 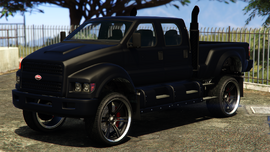