"Putting U in secure"

G4S
“Gruppe Sechs provides private security services and offers failed cops a second chance to enforce the law on their own terms.”
— Description at LCN.com

Gruppe Sechs is based on the British security company G4S (formerly Group 4 Securicor). The former name of the Stockade, Securicar, is also a reference to this.

Since Grand Theft Auto IV, the company's logo reads as "Gruppe 6", although "Gruppe Sechs" is still written in smaller print on the company's vehicles.

Gruppe Sechs guards do not appear in any 3D Universe games, as the Securicars are normally driven by generic pedestrians.

Guards do not appear in Grand Theft Auto IV either, with Stockades driven by civilians and no deadly force is used if their vehicles are stolen. However, the LCPD will pursue the player if they destroy the vehicle with a weapon.

Gruppe Sechs guards exist in the game, but they are only used in the multiplayer mode Bomb Da Base II.

Gruppe Sechs guards appear in regular gameplay in Grand Theft Auto V, this time appearing driving Stockades and attempting to protect the vehicle from thieves. The company is more prominent in the game as they provide security on at several locations (such as gas stations, Lester's House and the De Santa Residence) and security cameras with the Gruppe Sechs logo can be seen on various buildings. During certain missions, Gruppe Sechs guards can be seen outside of the Union Depository. If the player chooses the Subtle Approach for The Big Score, the heist crew will hijack two Gruppe Sechs Stockades and infiltrate the building in order to steal four tons of gold. Several other security guards wearing clothing featuring the Gruppe Sechs logo can be found around the map.

After the Duggans took control of The Diamond Casino & Resort in 2019, Gruppe Sechs was hired to help deliver casino chips to the vault. If the player chooses the The Big Con approach for the Casino Heist, they have the option to steal a Gruppe Sechs stockade along with uniforms, that can be used as a disguise for the heist. After completing the finale with the Gruppe Sechs disguise, the uniforms will be available for purchase at stores.

In Grand Theft Auto IV, Gruppe Sechs personnel wear a green shirt with the Gruppe Sechs logo embroidered onto the right sleeve while the U.S. flag is on the left sleeve. They wear a bulletproof vest accompanied with a radio and a belt, which includes a weapon holster. They wear dark green trousers with a green stripe down the side and black shoes.

In Grand Theft Auto V, there are two types of uniform for Gruppe Sechs employees:

Gruppe sechs guards as they appear in GTA IV.

A Gruppe Sechs guard at the Union Depository entrance.

A Gruppe Sechs guard at the Union Depository garage. 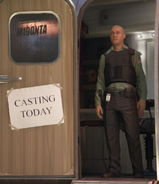 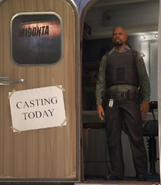 Gruppe Sechs guards out of a Stockade during the mission Blitz Play.

The heist crew with Gruppe 6 uniform during the Subtle approach of The Big Score.

Michael and Trevor disguised as Gruppe 6 guards inside the Union Depository.

A Gruppe Sechs security station inside a facility.

The GTA Online Protagonist in a Gruppe Sechs uniform.

Variant of the Gruppe Sechs uniform worn by the GTA Online Protagonist.

Ballot Van (only in Counterfeit Count) 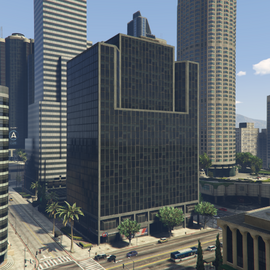