Yes
“The all-new Bravado Gresley promises to be the most fuel-efficient SUV in its class, guaranteed to get you from brunch to yoga to the kids' soccer practice on one tank, or your money back.”
— Southern San Andreas Super Autos description.

The vehicle is based on the Third generation Dodge Durango, and features a sporty and aggressive appearance. Many attributes of the Durango were carried over to designing the Bravado, including suspension stance, lower bumpers, the cabin and windows, badging on the rear hatch, and overall vehicle shape. A few design cues appear to have been taken off of the second generation Kia Sorento as well, including the headlights and frontal fascia. The tail lights are similar to the BMW X6 (including the XLS and its armored variant), and the rear end resembles a 200 series Toyota Land Cruiser.

The Gresley is distinguished by its rather boxy appearance, with a large front bumper that is quite predominated by the lower intakes, with the central one featuring a chrome detail on the lower side, and a thinner intake above these. The upper area is occupied by the large chrome grille bearing the manufacturer badge, as well as the circular headlights and the turning signals.

The sides of the car have flared arches and black/silver running boards at the bottom, while the front fenders bear a silver "BRAVADO" lettering. The cabin area has chrome trim around the windows, black B-pillars and carbon-fiber rear-view mirror shells. The door handles are also finished in chrome.

The rear end has a large compartment door, which holds a chrome detail over the license plate, the inner tail lights and the silver lettering displaying "BRAVADO" and "AWD". The edges of the car houses the outer tail lights, and the bumper features two small red lights, a black diffuser and two square-shaped exhausts.

The Gresley is only painted with a single primary color. It uses a unique set of wheels, consisting of eight spokes with thin ridges on it, and four bolts around the center.

Despite the powerful engine and sporty appearance, this SUV does not take off as quickly as one would hope, but it is still faster than most other SUVs. The off-road capabilities with this vehicle are very good despite the lower ride stance. The car is a good pick from a line of SUVs in its class, and has a 4 wheel drive layout, which can be only seen effective on rough terrain, making the car better off-road than on-road.

The Gresley is one of the few SUVs in Grand Theft Auto V and Grand Theft Auto Online to feature an automatic Locking Differential. When the car is taken on road, the AWD layout will not be prominent, and cannot be seen at all times, however, when the car is taken off-road, the AWD layout will become operable, and can be seen in action when wheel-spinning, inclining on steep hills, or pushing against a fixed object, causing all wheels to spin effectively.

Overall performance is average due to the Gresley's excessive weight. The vehicle's 0-60 time is acceptable for its class, but it is not spectacular, making the Gresley not the best getaway vehicle, especially under hot pursuit. The engine, however, works hard to propel the Gresley off the line, but its weight and aerodynamic properties limit the engine's true performance. The vehicle is mated to a 6 speed transmission in an AWD layout which gives the Gresley a better launch compared to other SUVs in its class. The Gresley also delivers more get up and go than other SUVs in its class thanks to its torqueful engine and good traction. Handling is better than average due to the Gresley's sophisticated AWD system, allowing the Gresley to retain good traction on and off-road as well as controlling body roll and fish tailing, even under hard, abrupt turns. Braking is also better than average, allowing the Gresley to stop completely in a shorter amount of time compared to other SUVs. Crash deformation is also good, enabling the Gresley to take multiple direct hits before the engine erupts in flames. Since the Gresley weighs almost five thousand pounds, the vehicle is ideal for ramming and running other vehicles off road.

The in-game engine cover appears to be a V8, with a sound that is distinctive by its grown and exhaust note.

The Gresley on the updated Rockstar Games Social Club. 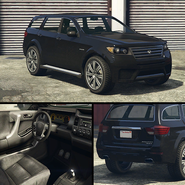 Taillight comparison with the XLS.