A Shadow Of Doubt

Huang: "So, just give me his name and we can all live happily ever after. Apart from him, of course. He'll live not so happily for not that long."
D'Avanzo: "We've gotta be real careful. I think he's onto me. His men could be here any minute looking for me."
―Rudy D'Avanzo might know who's the Triad rat.

Grave Situation is the first mission in Grand Theft Auto: Chinatown Wars given to Huang Lee from Rudy D'Avanzo.

Huang receives an email from Rudy D'Avanzo telling him that he might know a possible Fed rat that is selling out the Triads to the FIB. He then tells Huang to meet him at a cemetary in Steinway, where they will discuss the situation further.

In the cemetery, Rudy notifies Huang of a mobster called Jimmy Capra and explains to him that he may be selling out the Triads, and maybe even a crime Family D'Avanzo is allied with, to the FIB. Rudy mentions that he is wanted by the Messina family and that Capra's men are onto him.

Capra's men will then arrive at the cemetary and try to eliminate Rudy and Huang. Unlike other enemies in the game, Capra's men have significantly increased accuracy and can focus their fire directly on the player (similar to the player's own accuracy when standing still). Therefore, they can easily kill the player if they do not have reliable weapons. In conjunction with increased accuracy and firepower, they seem to have a lower health pool, so use this to your advantage. Use an assault rifle, such as the Carbine rifle or AK47 to quickly gun down enemies. Grenades are also available; take cover behind a large tombstone and lob a grenade at the enemies to kill them instantly, but be careful not to blow yourself up by a poorly thrown, ricocheting grenade.

After all of Capra's men are killed, a final short cutscene with Rudy occurs where he calls Huang "...a fucking natural!" and the mission ends.

"A mobster called Rudy D'Avanzo contacted me out of the blue.

He said the FIB rat is another mobster called Jimmy Capra, a guy who's become real friendly with Hsin recently.

He might be right - Capra's men found us and tried to kill us."

Grave Situation
Add a photo to this gallery 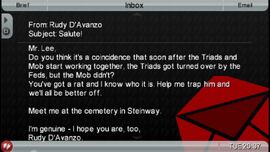 Rudy D'Avanzo sends an e-mail to Huang telling him that he might know a possible Fed rat. D'Avanzo tells Huang to meet him at Dukes Cemetery. 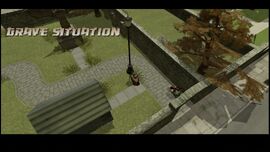 Arriving at the cemetery. 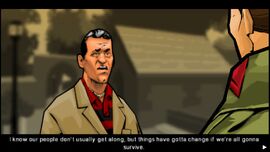 Meeting Rudy D'Avanzo. He tells Huang that him and the Triads don't usually get along, but they must help each other to survive. 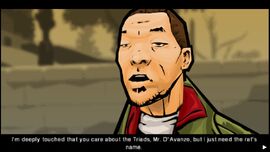 Huang asks for the rat's name. 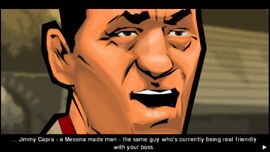 He says the rat is a mobster called Jimmy Capra and explains to him that he may be selling out the Triads. Rudy also mentions that he is wanted by the Messina family and that Capra's men are onto him; 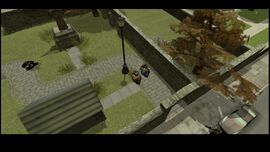 After a brief conversation, Capra's men will arrive at the cemetery. 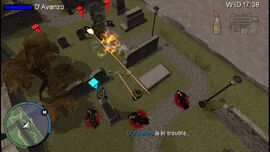 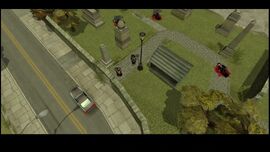 Huang and Rudy survives the shootout. 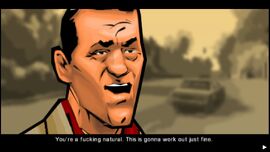 Rudy calls Huang "...a fucking natural!" and tells him that their partnership will work out just fine. 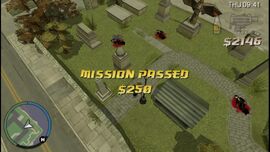 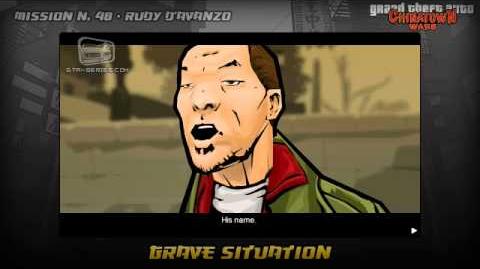 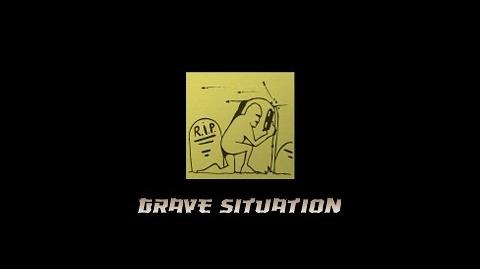 Retrieved from "https://gta.fandom.com/wiki/Grave_Situation?oldid=1320228"
Community content is available under CC-BY-SA unless otherwise noted.