"Yeah, I smoke all day and I'm fine. It's a pure mellow high. But I do get concerned about the monsters."
―Barry to Michael after he's just taken a hit

Grass Roots is a series of three Strangers and Freaks side-missions in Grand Theft Auto V. Michael, Franklin and Trevor each have a side-mission bearing this name. Completing Franklin's segment contributes toward 100% Completion.

Barry, a marijuana legalization advocate, is attempting to drum up support for the legalization process by lobbying the people directly - and giving out free samples of his home-grown weed. 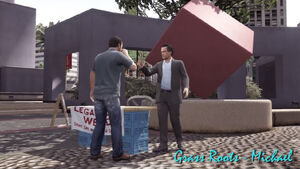 Before this Stranger will appear on the map for Michael, the player must complete:

Michael can meet Barry at a makeshift table he's set up in Legion Square. Barry will start in with a pseudo-political sermon on the benefits of marijuana legalization (and his theories about why it's illegal) before offering Michael a joint and temping him to smoke it. At first Michael refuses saying that he is "not a drug guy", but eventually he capitulates and has a few drags on the joint.

After Michael takes a few hits, Barry begins to mention something about 'monsters' and not letting them 'get too near'.

Michael's vision and hearing become blurred and the world around him appears to be in a purplish haze. He is suddenly hefting a minigun as aliens begin to appear all around him. Michael must defeat the aliens without dying himself.

Be mindful of any aliens that get close and hold Michael in the green energy field that you have to wiggle the left stick to get out of. If the alien is allowed to complete the process, Michael will be abducted. He will fly very high into the air and crash into the pavement, causing death.

When the last alien is dead, Michael returns to 'reality' and Barry is still droning on about the wonders of pot legalization. Michael, fed up with what just happened, tells Barry to stay away from him.

● Unmarked - Complete with minimal damage to health and armor 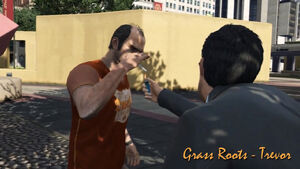 Before this Stranger will appear on the map for Trevor, the player must complete:

Trevor can meet Barry at a makeshift table he's set up in Legion Square. When Barry attempts to appeal to him about legalization of marijuana, Trevor bristles. Trevor explains that he makes a ton of money selling smoke and has no interest in legalization because it will harm his business.

Barry invites him to smoke anyway, and Trevor refuses saying it "interferes with the speed". Trevor's protest, however, is short-lived and he takes a drag from Barry's joint anyway.

Trevor's vision and hearing begin to blur and the world around him appears to be in a purplish haze. He notices a group of clowns nearby and an Assault Shotgun appears in his hands. Eventually clown vans show up that must be destroyed or they will continually generate clowns.

Once the clowns are dead, Trevor returns to 'reality' and angrily storms off. 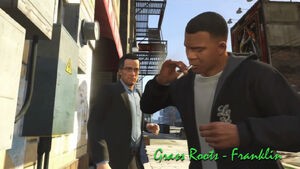 Before this Stranger will appear on the map for Franklin, the player must complete:

Franklin approaches Barry at a store front on Sinner Street in Textile City and Barry hits him with the marijuana legalization sales pitch. Franklin likes the idea of smoking weed, but thinks all of Barry's political rhetoric sounds 'kind of bullshit'.

Barry offers him a drag on a joint and Franklin takes him up without hesitation. However, because Franklin is already a habitual pot smoker, he does not have vivid hallucinations like the ones Michael and Trevor have. In fact, Franklin tells Barry that the weed is garbage before crushing the joint beneath his shoe.

Barry then finagles Franklin into searching the city for vehicles containing weed stashes that need to be delivered to Barry's apartment to supply the 'Smoke-in' Barry has arranged at City Hall.

After Franklin leaves, he'll receive a text message from Barry that reveals the locations of the stash vehicles. The areas in which the vehicles can be located will show as large light green circles on the world map and mini-map.

The mission can't be replayed afterwards, due to it being just a cutscene and having no objectives or medal challenges.

There are two vehicles to procure and each has its own mission segment and corresponding gold requirements (note that the vehicles can be found in any order):

Go to the lumberyard on El Rancho Boulevard in Murrieta Heights in East Los Santos, designated on the map by a light green circle. Locate the truck and Franklin will call Barry who will ask Franklin to deliver it to his apartment.

Lose any wanted level and drive the truck to Barry's apartment in Vespucci. You will then be required to drop it off in the alleyway behind the apartment complex.

Go to Rogers Salvage and Scrap yard just off Alta Street in La Puerta on the west side of Los Santos, designated on the map by a light green circle. Locate the car and start it up.

Franklin discovers that the car is a "hoopty" and after attempting to get it started without success, Franklin will call Barry. Franklin will suggest that they give up on the vehicle, but Barry protests and insists the vehicle is needed. He tasks Franklin with finding a way to move it.

Near the entrance to the scrapyard is a tow truck. Use the tow truck to hitch the car and drive it to Barry's apartment. Alternatively, the player can use a Cargobob to hook the car. Again, the vehicle must be left in the alleyway behind the apartment complex.

Once the player has delivered both stash vehicles, one final segment will open up:

Before this marker will appear on the map for Franklin, the player must complete:

Go to City Hall on Occupation Avenue. Climb the steps. It won't take long to discover that there is or was no smoke-in.

Franklin calls Barry. Barry seems very sketchy and it becomes clear that after Franklin dropped off the stash, Barry and his cohorts got so high they forgot about the smoke-in.

Leave the area to complete the mission epilogue.

The mission can't be replayed afterwards, due to it being just a phonecall and having no objectives or medal challenges.

Retrieved from "https://gta.fandom.com/wiki/Grass_Roots?oldid=1194980"
Community content is available under CC-BY-SA unless otherwise noted.