"The Industrial Heart of the Alamo Sea"

Location on the map (red) and its HUD boundaries (blue).

“Located at the northeast tip of the Alamo Sea, Grapeseed is a thriving agricultural and industrial community involved in the manufacturing of high-fructose corn syrup and meth.”
— Grand Theft Auto V digital manual

Grapeseed is a small rural town located in Blaine County, San Andreas that appears in Grand Theft Auto V and Grand Theft Auto Online. Grapeseed is situated north of Sandy Shores, southwest of Mount Gordo, west of the San Chianski Mountain Range and sits on the coastline of the Alamo Sea and the southeastern foot of Mount Chiliad. Its slogan is "The Industrial Heart of the Alamo Sea".

Grapeseed is an agricultural settlement dedicated to providing San Andreas with its food. Most of the area consists of large fields of crops and livestock along with barns, sheds, and silos containing the necessary equipment to maintain the crops. Fieldmasters are a common sight in Grapeseed along with the smaller Tractors. McKenzie Field is located just to the east of the town, and was probably used to store Cropdusters before it was bought by Trevor Philips.

In the western end of the settlement, there is a main road used for commerce and businesses with some residences along the southwest side. The stores are mostly just hardware stores, a Limited Gasoline gas station, and a clothing store. In the southeast, just south of Union Road (technically outside the community), there is a large grain storage facility with large tanks full of grain. Near the storage facility are a few abandoned buildings that form a rail terminus. A cluster of liquor stores is located at the southeastern edge of the community.

The rural town stays true to its slogan and is mostly meant for agriculture or labor.

Despite this, Grapeseed is no different from the nearby town, Sandy Shores, in terms of crime and drug dealing. It is said that the workers in Grapeseed also make amphetamine and distribute it, respectively. Some of the crops being grown also somewhat resemble cannabis, the plant smoked as marijuana.

Grapeseed is not used in many online jobs but it has been featured in several heist setup missions, including the Series A Funding finale cutscene.

After Trevor Philips brutally murders Johnny Klebitz, he and his lackeys drive to The Lost encampment in Grapeseed. They encounter Terry Thorpe and Clay Simons, and chase them out of town. Trevor later decides to eliminate the O'Neil Brothers who are proving to be competition for him in his dealings with the Los Santos Triads and destroys the farmhouse at the O'Neil Ranch.

Later, after Trevor has reunited with Michael De Santa, the two men are ordered by Martin Madrazo to assassinate his cousin Javier, who is to be arriving in a Shamal. Michael manages to disable the jet's engines using a high-tech sniper rifle, and the jet flies off out into Blaine County. The jet crashes into the fields of Grapeseed, killing several workers. Trevor then executes the weary Javier before returning.

Grapeseed is a scaled down version of Bakersfield, California. However, it does take some influences from other areas such as Lamont and Grapevine. 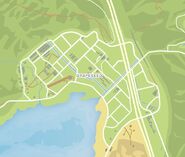 Grapeseed on the map. 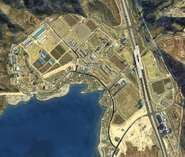 Grapeseed Main Street with Grapeseed Farmers Market in the foreground.

East Joshua Road with Liquor Market and Auto Repairs branches in the background.

Grapeseed when looking east from the foot of Mount Chiliad.