Standard White - 100%
“The heavyweight champ of LS hustlers, the Granger 3600LX has so much interior room, you won't catch a hint of the gasoline and candy bars on your passenger's breath. But, if you still want to keep distance, you can always have your associates hang off the sides. Install exclusive modifications at the Agency Vehicle Workshop.”
— Southern San Andreas Super Autos description.

The Declasse Granger 3600LX is a four-door full-size SUV featured in Grand Theft Auto Online as part of The Contract update.

The Granger 3600LX is primarily based on the eleventh generation Chevrolet Suburban (GMTK2YC). Its design is almost entirely similar to the real eleventh generation Suburban but with a few differences; the headlights, while shaped similarly to the Suburban, lack the bottom tab on the side, making them somewhat resemble those of the second generation Nissan Titan (A61), while the tail lights, also shaped similarly to the Suburban but with the arrangement altered, resembling those of the 2014–2021 Toyota Tundra; likewise, the grille and side trim are taken from the fourth generation Cadillac Escalade (GMTK2XL).

The front of the SUV is similar to its older iteration, being geometric and designed to create a butch profile, but has a pointy shape on the center. At the base of the front bumper there is an extension made from a polymer, followed by a strip that almost spans the entirety of the vehicle's width and is also finished on the same material. A rectangular section can be seen on the center of the strip which spans about one third of the vehicle's width, while the edges are slightly taller and hold rectangular fog lamps (which are unusable). Similar to the older model, the main grille and headlight units are located above the front bumper. The main grille has three main horizontal chrome strips, with the manufacturer logo located between the upper and middle strips. The headlamps have bottom edges in line between the grille bottom and the lower strip, and top edges in line with the top of the grille and below additional chrome strips. The headlight units feature two outer circular lamps and two C-shaped inner lamps (leaving a small gap between the two units) and then a wide strip split between the inner main units and the outer turn signals. The hood features a large elevated area whose boundaries continue the side boundaries of the grille, along with a smaller elevation around the center, near the windshield.

The sides of the SUV's body illustrate its intention for off-road use. Compared to its older iteration, the wheel arches are slightly elevated from the rest of the body, with long slatted running board at the bottom and chrome strips on the doors, together with "GRANGER" lettering embossed on the front doors and painted horizontal door handles. The body has additional extra formations on the upper area, at the same height as the top of the grille and running parallel to the waist line, reaching the edges of the tail lamps. The greenhouse area features windows that have thin black trim around the edges, B-pillars finished with black trim and black rear-view mirrors near the A-pillars, as well as a chrome trim around the side windows. On the roof, there are five longitudinal ridges and a roof rail at either side that have a chrome finish with black edges, along with what looks like a roof spoiler at the top of the rear windscreen. A third brake light is seen on the center of the same roof spoiler.

The rear features a large windscreen on the top half of the rear compartment door and a solid panel on the lower half that has a chrome detail just below the windscreen, a central section for the number plate, the manufacturer logo above the number plate section and "GRANGER" lettering embossed on the lower left corner. There are thin tail light units that sit between the rear windscreen and the protruding rear bumper. These units are split into four sections, being large red units that work as the upper brake lamps and the lower main lamps, split by dual units that work as the outer reverse lamps and the inner turn signals. The bumper bears two thin reflectors on either side and a bulky section on the center (which functions as a tow hitch cover on the real-life Suburban), while the bottom side has a polymer finish and dual-exit, dual squared exhausts derived from the older iteration.

The interior of the vehicle features large aircon units beside the central radio display and smaller units on the outer edges, while the section between the seats have cup holders. The dial set is the same as the older model and most SUVs, but are slightly cut from the bottom, and the warning lights are located between the main gauges. There appears to be a small screen above the dial cluster, while the steering wheel bears the manufacturer logo on the horn cap.

The vehicle is painted with a primary color for the bodywork and a secondary color for the overstitches of the seats. It uses a set of six-spoke rims with a high-profile tires, having a similar tread pattern to the older iteration. The rims can also support a dedicated color, although only naturally-generated examples may have one.

The Granger 3600LX is a powerhouse, due to its single-cam V8 engine and extremely stable 4x4 design with 4-speed transmission. While it is somewhat inferior to the older iteration in terms of top speed and acceleration, the additional upgrades give it a notable advantage.

Being a full-size SUV, the Granger 3600LX performs as such. Its large, heavy body leans over to the side excessively when cornering hard. It has relatively soft suspension overall which can make it very sluggish, meaning it exhibits poor agility both at low and high speeds. With that being said, because of its sluggishness, it is a very easy car to control, with the player not having to worry about much oversteer or understeer at all. Furthermore, it displays poor acceleration as well as top speed, though its excessive weight can help with ramming.

Similar to the older iteration and its law enforcement variants, the vehicle can hold four occupants inside and four outside, with the latter able to use Assault Rifles and Light Machine Guns while being driven, making it excellent for drive-by's and assaulting other cars. Care must be taken by the driver of the vehicle when players are riding on the running boards since they can be knocked off and killed in collisions.

Installing any "Roof" modification will increase its traction slightly, in the same way as a spoiler.

The Granger 3600LX, along with selected vehicles from the same update, can be modified with a Remote Control Unit, which allows to drive the vehicle remotely, similar to the RC Bandito and the Invade and Persuade Tank. Note that the camera is always set to first-person view, and cannot be kept if the Missile Lock-on Jammer is installed.

When the Armor Plating upgrade is equipped, the vehicle adds armor paddings on the sides in a similar manner to the armored vehicles featured in the Executives and Other Criminals update. However, it gives a much higher resistance to explosives in general. It also has bullet-resistant windows, which are able to withstand 15 rounds from most firearms before being shattered.

The Granger 3600LX, along with selected vehicles from the same update, can be modified with a Missile Lock-on Jammer, which prevents the lock-on system of the Homing Launcher and other weaponized vehicles to target onto it. Note that it cannot be kept if the Remote Control Unit is installed. 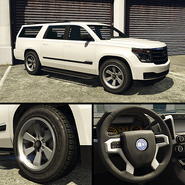 The Granger 3600LX in the cinematic preview on Rockstar Games Social Club.