The Granger features North American styling similar to the tenth generation (2007-2014) Chevrolet Suburban (GMT900) in terms of the front-end, side and rear profile, with subtle design cues of the refreshed model, applied to the front end. Its headlights resemble the 2007-2013 GMC Sierra.

The front of the SUV is geometric and designed to create a butch profile. At the base of the front bumper there is a central trim area with elevated rectangles made from a polymer and a plate holder mounted on the center. Level with the top of the trim and on either side of it, there are circular fog lamps. The main grille and headlight units are located above the protruding front bumper. The main grille has three main horizontal chrome strips, the middle strip bearing the manufacturer emblem. Inset between the three main strips there are thinner horizontal strips. The headlamps have bottom edges in line with the top edge of the bottom main grille strip and top edges in line with the bottom edge of the grille's main top chrome strip. The headlight units feature two main wider sections (split by a continuation of the grille's central chrome strip) and then a thin, tall amber strip out at the edges. The hood features a large elevated area whose boundaries continue the side boundaries of the grille.

The sides of the SUV's body illustrate its intention for off-road use. The wheel arches and much of the area between them are elevated from the rest of the body, with long running board at the bottom and black horizontal handles. The body has no extra formations, other than angled lines between the arches, at the same height as the top of the bumpers. The greenhouse area features windows that have thin black trim around the edges, D-pillars finished with black trim and black rear-view mirrors near the A-pillars. The car also has Light Smoke window tint by default.[1] On the roof, there are six longitudinal ridges and a roof rail at either side, along with what looks like a roof spoiler at the top of the rear windscreen. A third brake light is seen on the center, below the same roof spoiler.

The rear features a large windscreen on the top half of the rear compartment door and a solid inset panel on the lower half, with "GRANGER" and "3500LX" lettering embossed on the lower left and lower right corners of the lower half, respectively. There are thin tail light units that sit between the rear windscreen and the protruding rear bumper. These units are split into three sections, being upper reverse lights, middle main/brake lights and lower turn signals. The bumper bears a black upper surface between the tall edges, while the bottom side has a dedicated central section for a plate holder and wide moldings for the dual-exit, dual squared exhausts. The interior is the same from vehicles such as the Cavalcade and the BeeJay XL, which in the enhanced version, uses the same yellow dial set.

Grangers may spawn with or without a black bullbar with chrome bars protecting the grille and headlights. The vehicle is usually seen with a single color on its bodywork, while in other instances, it may be seen with a secondary color, applied to the bumpers and wheel arches. The SUV is fitted with high profile tires and split five-spoke rims similar to the "Dune Basher" off-road wheels available in Los Santos Customs. While the rims are set to spawn with the default alloy color and is mostly finished in black and silver/chrome, the wheel color gives a slight tint/shade of the selected color that is more visible on the silver/chrome areas, which is only possible in examples generated in Content Creator.

The Granger is a powerhouse, due to its superior turbocharged V8 engine (further modeling shows an inline-4 engine) and extremely stable 4x4 design with 5-speed transmission, it is best designed for taking, and dishing out, serious punishment. Although lacking in the raw speed of a sports-class vehicle, the Granger has no problem navigating difficult terrain such as mountainous, rocky, or sandy areas, making it ideal for off-road escapes, especially when running from smaller on-road designed vehicles.

The Granger is capable of sustaining multiple assaults from head-of collisions and drive-by shootings, while remaining driveable, making it a favorite of the NOOSE, Sheriff and Park Rangers. The one downside of the Granger is its relatively low ride height, which makes certain obstacles, such as steep stairs and steep inclines an issue. In order for the SUV to make it over these obstacles the front bumper may need to be broken off.

The Granger is a large vehicle, and because of this, can hold up to eight passengers (four inside and four outside), which makes it one of the largest capacity vehicles in the game in this regard. The Granger, due to its great torque and weight, is able to barrel through most cars on the road, including roadblocks, fences, and even larger cars. The passengers hanging onto the outside are able to use Assault Rifles and Light Machine Guns while being driven, making this car excellent for drive-by's and assaulting other cars. Care must be taken by the driver of the vehicle when players are riding on the running boards since they can be knocked off and killed in collisions.

The vehicle uses a loud sounding engine derived from vehicles like the BeeJay XL and the Bodhi, which is also shared with its service/law enforcement variants.

The Granger seen in the game trailer.

The Granger on the updated Rockstar Games Social Club.

The Granger in the cinematic preview on Rockstar Games Social Club. 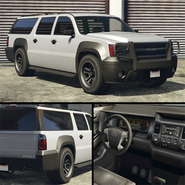 SUVs with side rails and stepsides