2D Universe
“London can be yours, but as betrayal and brutality engulf your world, you've got to keep a level head, keep earning the cash, and keep driving a sleek ride. Or you'll have your head kicked in, and no mistake, sunshine. You're playing with the big boys now, and we haven't had our dinner. So, my boy, only one question remains ... do you want in? If so, get to bloody work. If not, go and play with your action figures, and stop wastin' our time. Alright?”
— Official Description

GTA: London 1969 was released in 1999 for the PlayStation and the PC. It offered 32 brand new missions, as well as a total of 30 new vehicles, relative to the time period. The game is very similar to the original Grand Theft Auto because it uses the same game engine and is presented in the same format of missions, sections and cutscenes. On the PlayStation, the disc for the original GTA game is needed to play London 1969, and on the PC, the original is also needed to be installed to play with mods. A standalone Special Edition was released for PlayStation in 2000 in the United Kingdom only.

The game takes place in London, the capital city of England in the United Kingdom, and is set in the year 1969. As such, it (and the second expansion pack) are the only games in the series to take place in a non-fictional location. The player chooses the role of one of a group of stylish young hoodlums looking to work his or her way up the career ladder of London organized crime.

The temporal setting has been exploited through a number of cultural and historical references, such as Get Carter, The Italian Job, the appearance of a James Bond-like character and a Bond-like villain, and the usage of more or less authentic Cockney slang. In addition, the cars drive on the left, as is the case in Britain.

A second expansion pack, Grand Theft Auto: London 1961, was later released featuring younger versions of the same characters featured in 1969, set eight years earlier in 1961. 1961 was released solely for the PC version and offered as free download from Rockstar. It requires GTA London 1969 to play, which in turn requires GTA. 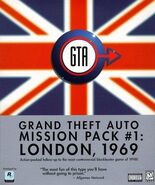 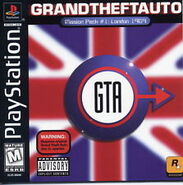 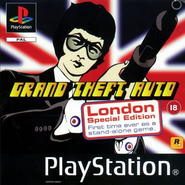 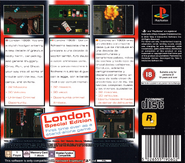 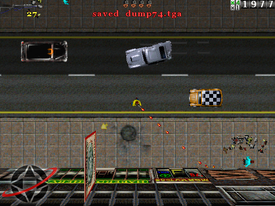 The gameplay is almost the same in GTA, including the dock cranes for import/export, Kill Frenzies, police bribes, Pay 'n' Spray and bomb-fitting garages of the original, except the location and British specifics such as driving on the left hand side of the road. Navigating the game menus causes sounds such as the chimes of Big Ben.

Successfully completing a mission will result in a Cockney-accent saying "Nice one my Beauty!" If the protagonist attracts too much police attention, the London police will pursue, identified on the HUD by police heads with "English bobby helmets". When arrested by the "cozzers", the police will say "You're Nicked!". If the protagonist is killed, a message will come up saying "You're Brown Bread!", which is Cockney rhyming slang for "you're dead".

The weapons in GTA London: 1969 are identical in function and performance to the original GTA, although their HUD icons are changed to be given a retro, somewhat primitive, 1960s aesthetic.

HUD icon of the 1960s flamethrower

The characters and protagonists are stereotypical cultural depictions of the era. Grand Theft Auto: London 1961 acts as a prequel and features mostly the same characters.

Over 30 missions are added in the GTA London 1969 expansion pack. The missions are similar to the original missions: usually getting jobs from red telephone boxes, walkie-talkies, and a "telegram pager", or if activating a mission when entering a certain vehicle.

After choosing from a group of potential protagonists, the player will do jobs for bigger and bigger London crime lords, removing rivals, gaining wealth and reputation. Missions start with Harold Cartwright and his gang, and get mixed up with a football team, secret agents and international terrorists.

After a series of double-crosses on both sides, the protagonist will be asked to remove Cartwright for "the firm". Eventually the player will do jobs for firm middle-man Jack Parkinson, who will lead the player onto London's biggest kingpins, Archie and Albert Crisp (based on the real-life Kray twins), and the player will finally take over London underworld from the Crisp twins for themselves.

Over 30 new vehicles were added to the GTA: London 1969 expansion pack. These feature many new vehicles to steal and drive, including those common to the London of that era such as vehicles based on Minis, London double-decker buses, and black taxi-cab Hackney carriages. There are also designs based on many famous British cars of the era, such as Volkswagen Beetles, Bentleys, Jaguars, Aston Martins, and Rolls Royces.

The soundtrack cycles through at least ten radio stations, including Blow Upradio , Heavy Heavy Monster Sounds , Westminster Wireless, Sounds of Soho, Radio Andorra, Kaleidoscope , and Bush Sounds. Each radio station only plays a few tracks (like Head Radio in the original GTA), before moving onto a new station. Every station has a different DJ, with the voices over-exemplifying stereotypes of the era; none of the DJs are named except "Doctor Peter Pants-On" of Radio Penelope.

The music tracks are comprised of primarily three kinds of music. These include late 1960s reggae/ska, psychedelia, and bombastic Swinging Sixies big band/jazz instrumental pieces. The former is taken primarily from the catalog of Trojan Records and the latter are taken primarily from the scores of 1960s Italian heist movies, especially those composed by Riz Ortolani. A listing of the licensed musical material used in the game can be found here.

There are also a number of tracks which are original material, developed in-house by Rockstar, such as "GTA Pomp", "GTA Spy Theme", "Saturday Nite at Dirty McNasty's", "The Queen's Theme", and "Austin Allegro Chase", which are played during certain missions, or when entering specific vehicles.

The radio is occasionally interrupted by news flashes warning of the crime and carjacking spree taking over the capital. There is also a track of ambient London streets sounds, and a humorous police radio channel (entitled "Book 'em") for the Metropolitan Police Service.