Patrick Duggan
“Who says cosplay is a demeaning way to earn a living? Not me! I'm the Vinewood Zombie. I'm the undead.
Come take a photo. It's only ten bucks. I won't give it to charity. I am a charity.
I am a very sad and lonely man named... Graham.
”
— Graham

Graham (aka Vinewood Zombie) is a minor character in Grand Theft Auto V, appearing as a soapboxer.

Graham is a young white male who wears zombie make-up and tattered clothes, who can be found at the corner of Vinewood Boulevard and Alta Street. He is cosplaying the Vinewood Zombie, apparently based on a character from a movie of the same name.

He will speak to the player if addressed. Graham's act consists of speaking about zombies as a cultural obsession and offering take pictures with passers-by for $10. His dialogue reveals a great deal of self hatred and loathing; he states, for example, that he wants to give himself a lobotomy, and his tone is filled with desperation. He also takes a phone call from his mother, telling her that his performance is a postmodern statement "on the proliferation of zombies in culture".

He attended college and majored in philosophy, a decision that he clearly regrets.

He also states that he can be found on Bleeter and Lifeinvader. 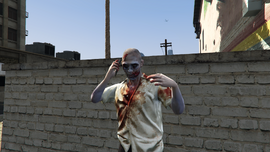 Graham speaking with his mother over the phone.