View source
watch 02:34
Fire Emblem Warriors: Three Hopes - The Loop
Do you like this video?
Play Sound
For the similary named mission in Grand Theft Auto IV, see Do You Have Protection?.

O, Brothel, Where Art Thou?

In-game time
“We've been having some problems with the Cholos. They've been threatening some of my girls. I want you to teach them some respect.”
— Marty Jay Williams

Got Protection? is the final mission in Grand Theft Auto: Vice City Stories given to protagonist Victor Vance by Marty Jay Williams, leader of the Trailer Park Mafia, from his trailer in Little Havana, Vice City.

Victor goes by Marty's trailer looking for more work and Hank, one of the members of Trailer Park Mafia, calls him boy, which offends Victor. Victor retaliates before Marty reminds him that he is in charge. Marty tells Victor that his girls have been having trouble with the Cholos gang, unhappy that they lost their brothel. Victor goes to the brothel and is attacked by the Cholos who say that some prostitutes are going to be killed.

Victor commandeers a four door vehicle and drives to a prostitute under attack from two Cholo gang members. She gets into the car and begins shooting at the Cholo gang members. Victor gets to and rescues the second prostitute, who also begins to shoot at the Cholo Sabres that begin to chase Victor. Victor drives to and rescues a third prostitute before returning to the brothel. From this point on Vic refuses to do any more work for Marty.

The reward for completing the mission is $500. 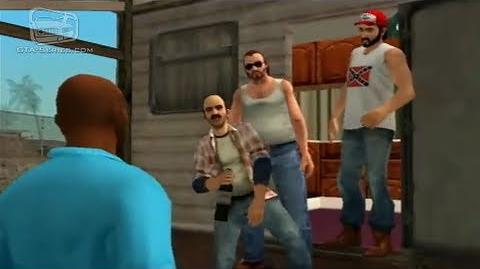