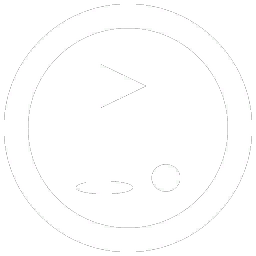 The first depictions of golf in the GTA series appear in the form of golf courses in the city. They include:

With the exception of the Golden Pier Swingers Golf Course (which is merely a driving range), these golf courses tend to be depicted with open lawn areas, sand traps, water hazards, putting greens (complete with flag poles pinpointing golf holes) and the country club building itself; (non-interactive) tennis courts are also present within the Leaf Links and Avispa Country Club. It is also common for the player to spot golfer pedestrians and Caddy golf carts in and around the courses.

Golf as a minigame

In GTA Vice City Stories the player can use the Leaf Links driving range.

The game mechanics of the minigame require the player to time their swings as accurately as possible by plotting an oscillating cursor on a "power" bar as close as possible to a designated point, thereby resulting in a more accurate shot.

Golfing is first introduced during "Home's on the Range", which also unlocks the Swinger's Club golfing side mission.

In The Ballad of Gay Tony, the player is given the opportunity to tee off at the Swingers Golf Club driving range.

The game mechanics are similar to those used in Vice City Stories but in the Ballad of Gay Tony, the shooting mechanics are slightly improved to allow the player to point at the spot where they want the ball to land, while increasing the challenge of gameplay; the further the target which the ball must go, the higher the point which the cursor must be plotted at it is.

Golfing is available after completing "Practice Swing", after which it can be activated by accessing the front entrance of the Golden Pier's Swingers Golf Course; players can choose to play with an anonymous competitor, or play with any of Luis Lopez's friends.

In Grand Theft Auto V, golfing returns as a proper minigame, with much improved mechanics and gameplay. Playing Golf can be unlocked by completing Franklin’s mission, Complications. To play a round of golf, the player must walk up to the entrance of the Los Santos Golf Club and pay an entrance fee of $100. The golfing minigame consists of hitting the golf ball towards the green and then putting it into the hole in the least number of strokes possible. Between strokes, the player is allowed to drive the Caddy to the next shot (this step can be skipped).

Gameplay now closely approximates a real game of golf with a full set of clubs at the players disposal. Players are able to change club and stroke type and adjust their aim and preset their desired power before attempting a swing. Putting greens include a slope indicator grid. Weather conditions directly impact the difficulty including wind strength and direction and rain slowing the greens and fairways. Hazards like water and out of bounds incur proper penalties and the rough and sand traps influence the release path and speed of the ball. Players can impart spin on the ball immediately after contact to attempt to achieve advanced strokes such as fades and draws.

Statistics such as longest drive per hole, fairways and greens in regulation, and closest to the pin are all kept and a message will appear on screen whenever the player improves upon their personal best in a particular statistic.

All three protagonists can play golf with each other as a friend activity, though the character who instigates the game has to pay for both rounds. If the instigating protagonist owns the golf club, they will all play for free.

If the player begins a game of golf alone, they will be able to compete against up to three NPC players. Todd is available immediately, while the next three NPCs will become progressively available as opponents after completing a round with the easier level opponent. 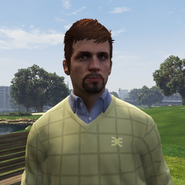 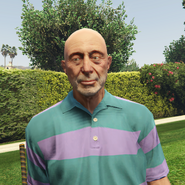 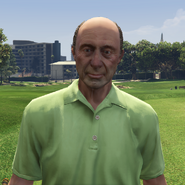 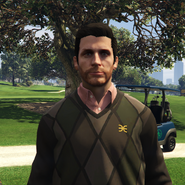 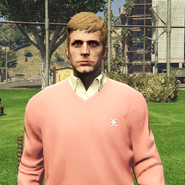 *Castro will only be available after the player completes his random event and only provided Trevor does not deliver him to the Altruist Cult.

All five opponents will be available to all three protagonists once any character unlocks them.

The NPC difficulty level not only relates to their individual skill but increases the chances of a more difficult round, with adverse weather more likely with the hard level characters.

The world clock is paused while the player participates in a round of golf.

An even par or below par complete round of 9 holes is required for 100% Completion in GTA V.

Playing golf will increase the character's strength stat, and higher strength will result in longer drives in golf.

Gameplay in GTA VCS and TBoGT

The golfing minigame in Grand Theft Auto: Vice City Stories, during "Home's on the Range".

Golf in The Ballad of Gay Tony.

The map during play (in the Enhanced Version)

Closest to the pin record.

Out of bounds penalty. 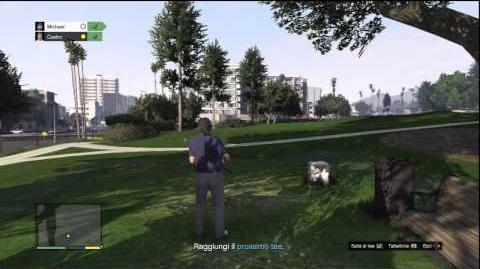