Go Go Space Monkey is a minigame in Grand Theft Auto: San Andreas that appears as one of the game's four playable Arcade Games.

Go Go Space Monkey arcade machines are scattered throughout interiors of buildings across the state, including bars, nightclubs, 24-7 stores and Madd Dogg's Crib.

A pre-release screenshot for Grand Theft Auto IV reveals that this game was going to be featured in the Homebrew Cafe (shown to the right of the unused pedestrian model), but was omitted from the final product and replaced by a QUB3D machine on the other side of the room. It is unknown if the game would be interactive or not, though it most likely would not have been.

Go Go Space Monkey is a simple side-scrolling video game in which the player assumes the role of a monkey that is riding a wooden tub strapped with rockets while battling waves of alien bananas on spaceships. With only three lives, the player is required to destroy as many enemy ships as possible before they run out of lives. A hit by a bullet from an enemy or a collision with an enemy ship results in the player losing a life.

Initially, the player is only capable of shooting one stream of bullets against the enemy, making killing slightly difficult. However, for every strand of enemy ships the player destroys, they are granted a power-up that they must retrieve before it disappears off the screen, though this is not necessary. The upgrades steadily improve the player's firepower, including increased shooting speed and additional streams of bullets. As the player's firing capabilities improves, so will the speed and ferocity of the enemies, who will fluctuate along the screen quicker and fire more bullets against the player. If the player is killed, their firepower is reset to what they had in the beginning, requiring the player attain upgrades all over again.

Despite its supposed difficulty, players can easily attain a hi-score in their first sitting as the pre-existing highest scores are not remarkable to begin with.

In Grand Theft Auto: Liberty City Stories, a video game titled Space Monkey 7 is heard advertised on the radio stations K-JAH and Liberty City Free Radio. The video game was seemingly popular in Japan and Europe. The advertisement states that the game is now released to America and it is also announced that they get to "destroy mankind all over again" which is the objective of the game. It is rumored that Space Monkey 7 is a sequel to Go Go Space Monkey, but the plot of the game has changed significantly: the video game involves brawling with fossils and destroying "Doctor Chank's dark simian research facility" after a nuclear holocaust which caused the monkeys to leave Earth. It is also mentioned that Space Monkey 7 is "fun family-friendly apocalypse" so it is most evident the game is suitable for all ages.

Female astronaut: This is Data Station to a Project Station SST. You are out of a projector. Please respond.

Female astronaut: Oh no, they're coming back!

Male announcer: In space, nobody can hear you cry. He's back. It's Space Monkey 7, the video game that swept through Japan and Europe. Now, America gets to destroy mankind all over again!

Male announcer: After a nuclear holocaust, the monkeys leave Earth, but they return to destroy the dark simian research facility controlled by Dr. Chank.

Male announcer: Fight the fossils, and not the ones in our game design department. Discover your origin, give in to the beast within. Darwin's dangerous idea just got worse. It's fun family-friendly apocalypse that will keep you and the monkeys entertained for hours.

In Grand Theft Auto V, there's a billboard over the Hardcore Comic Store announcing the film Space Monkey 3D, and so its phone app. It is unknown if the figure of the antropomorphic monkey right at the top of the comic shop is actually the Space Monkey.

In the enhanced version of Grand Theft Auto V, returning player from the X360/PS3 version can have access to a Blista Compact with a paint job inspired in the Go Go Space Monkeys game, the Go Go Monkey Blista. 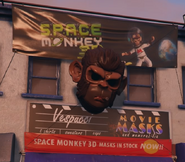 Retrieved from "https://gta.fandom.com/wiki/Go_Go_Space_Monkey?oldid=1214404"
Community content is available under CC-BY-SA unless otherwise noted.