No
“To the uninitiated, it's a neat little 80's compact with retro arcade livery. But to you, it's a badge of honor. It's a testament to every podium you climbed, every bullet you dodged, every bet you placed, every vehicle you customized, every competitor you immolated and every middle finger you shoved in the face of every idiot dumb enough to stand in your way. To the victor go the spoils.”
— Southern San Andreas Super Autos description.

The vehicle is exclusive for the enhanced version players who have returned from either the Xbox 360 or PlayStation 3. As of the Arena War update for Grand Theft Auto Online, it is available to all players who have reached Skill Level 20 in Arena War.

The vehicle is essentially a Blista Compact with a Go Go Space Monkey livery wrapped across the vehicle. This livery mainly consist of a black colour with yellow, orange and white lines around the bumpers, as well as yellow-coloured rims. The Blista Compact's badges were also retained in this variant, and while it retains the same modifications, some of them may bear the coloured stripes from the livery. The rear central case between the tail lights also has the Videogeddon Arcade logo plastered over the "BLISTA" marking.

Files indicate that the vehicle spawns in a Pure White paintjob with Pure White pearlescent, which is only visible in the portions of the car not covered by the texture (such as the door trims and the underside of the hood), as well as the optional roll cage of the "Roll Cage and Chassis Upgrade" modification. The vehicle also retains the wheel design from the Blista, being a derivative of the "El Jefe" muscle rims seen in Los Santos Customs, albeit painted with a Worn Taxi Yellow colour (which may reset to the default alloy if the wheels are changed). Purchased examples, however, are set to spawn in a red colour with default alloy rims. 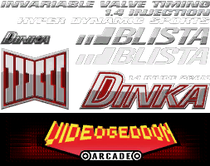 The vehicle shares the performance with the original Blista Compact, being surprisingly fast with nimble handling and good suspension. At low speeds, the front wheel drive makes the Blista Compact feel very responsive and engaging, but it suffers from noticeable understeer at high speed. The car handles acceptably well, but does have occasional bouts of oversteer. Crash deformation is acceptable, and it is able to take a few decent hits before being disabled. Any major hit to either of the front wheels has a strong possibility of jamming the wheels, and immobilizing the car, so colliding into hard objects should be avoided where possible.

Again, the engine model is a twin-cam Inline-4, laid transversely in a front-engine, front wheel drive configuration. Also, the engine sound is shared with the Monroe, Bifta and Kuruma, implying it is turbocharged. 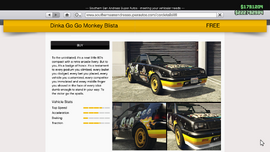 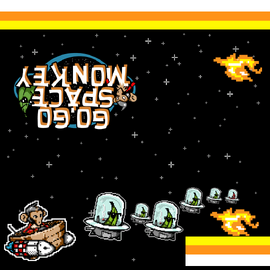 To unlock the Go Go Monkey Blista, the following steps must be completed: