In Grand Theft Auto IV, the company operates a chain of filling stations in Suffolk, Liberty City and Tudor, Alderney (combined with car wash and near a Swing set); the latter is featured in GTA Chinatown Wars as one of the many filling stations where the player can produce Molotov cocktails.

Other notable landmarks include its offices at Babbage Drive in Berchem, Alderney City, and a large refining facility in the Acter Industrial Park. Globe Oil also operates its own website, Globeoil.net, in The Lost and Damned.

In Grand Theft Auto V, there are several Globe Oil gas stations throughout San Andreas; two are within the city of Los Santos and there is another located in Blaine County. The player can also buy shares in company stocks on the Bawsaq website.

Globe Oil is most likely a parody of Gulf Oil as the logos share similar styling. Its color scheme is based on Havoline.

Globe Oil have two filling stations, one within Liberty City and another in Alderney:

Tinderbox Avenue and Latchkey Avenue, Tudor, Alderney.
Add a photo to this gallery

Globe Oil also have a large office and a refinery, both within Alderney:

Refinery at the Acter Industrial Park.
Add a photo to this gallery

Harmony, Route 68, Blaine County.
Add a photo to this gallery

In Grand Theft Auto Online, the company appears as one of the minor sponsors on the livery of 190z.

Globe oil is also featured as the main sponsor on the livery of the following vehicles: 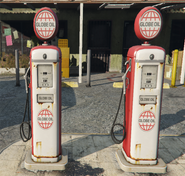 Retrieved from "https://gta.fandom.com/wiki/Globe_Oil?oldid=1142416"
Community content is available under CC-BY-SA unless otherwise noted.