This page lists all of the possible glitches encountered in Grand Theft Auto: Vice City.

In the mobile version of the game, Tommy can obtain infinite ammo for whatever weapon he wants. To do this, the player can start a rampage, then turn of the device without shutting down the game. When the player turns on the device and loads up the game again, Tommy will have the weapon used in the rampage with infinite ammo.

The player must find a motorbike and a clothing icon. Next, they have to park the bike in the clothing icon, but make it so that when Tommy gets off, he will not touch the icon. Then, they need to get off the bike then get back on. If the player performs this correctly, Tommy should have changed clothes and mounted the bike at the same time, and as a result, he will be in a standing position, yet his character model will be stuck inside the motorcycle, preventing him from being involuntarily ejected from it. This also works for cars, but it is much easier with motorcycles.

If the player gets hit on a bike without getting knocked off, there is a rare chance of the player riding with zero health. The player will ride around in this state until they are killed.

The Cherry Popper's save point can corrupt the player's saved file. This doesn't always occur, but it's recommended to use a different save point.

The initial scores of both Trial By Dirt and Test Track will have the same time results once both scores are listed in stats. Once the player replays the missions and gets better times, the scores will be listed individually.

The Ghost Tower refers to an air traffic control tower that was originally intended to be located within Fort Baxter. If the player is heading towards the southern half of the Vice City Mainland from the Vice Beach side, they will notice an odd-colored building with a large antenna in the distance. However, after the player arrives on the Mainland, the tower disappears. This tower was going to serve a runway at the base, but both were cut before the game was released. The texture can still be seen before entering the Mainland but as when the island is entered, the map fully loads and the tower disappears and can't be viewed up close. The tower is just a low density texture that was accidentally left in the game (most structures that are way off in the distance are low-density, but when the player gets close to them, their texture gets clearer and they become high-density). This glitch is much more defined in the 10th Anniversary edition and can also be seen in GTA Vice City Stories.

Get a car, and drive off of a jump. In mid-air, press the vehicle enter/exit button, and the car will suddenly freeze floating in the air, with Tommy standing on the roof. However, on rare occasions, the car may disappear immediately when the button is pressed, and Tommy will fall to the ground. This glitch seems to have been fixed in the PC version and in other subsequent ports.

There are criminals walking around the city, other than Tommy, and they sometimes jack vehicles, even the player's. If the player sees one of them slowly walking towards their car, they must park in a position so that the jacker will try to get in the car through the right front door. When it opens the door, the player needs to drive away. The jacker will get into the right front seat, leaving the player in the driver's seat, but they will lose control of the vehicle. Instead, the car will drive itself as it would be an AI vehicle such as stopping on red lights. The criminal won't change seats if the player exits the car.

It is unconfirmed, but while the player is still sitting in the car, they can try killing the jacker by doing a drive-by on the right side. This is a rare glitch, and the criminal ped will only enter the car if the "enter vehicle" animation has reached a certain point, where driving away with the car won't just knock over the ped on the sidewalk in the process.

If the player parks their vehicle in the far right corner of the fenced area, right next to the parking lot entrance near Collar and Cuffs in Ocean Beach, it instantly disappears upon exiting. The glitch is also present on the 10th Anniversary edition and in Grand Theft Auto: Vice City Stories.

If the player lands a Sea Sparrow in a Pay 'n' Spray, it will emerge from the garage with wheels on the pontoons. The only Spray Shop big enough to accommodate the Sea Sparrow is the Spray'n'go behind Sunshine Autos. The same can also be done on the VCN Maverick (tested on PS2).

If one of the weapons in the player's inventory is used in a Rampage, they will lose it immediately when the mission ends.

Stuck in a Building

It is possible to become stuck in large buildings by ramming them with a motorcycle at high speeds. The game will play the animation for Tommy's character model getting flung off, sending him through the wall. This glitch is quite rare, however, and is often the result of a fluke. There is no way to get out of this area other than suicide, though some buildings lead to Blue Hell.

The player must get a fast motorcycle, and drive it towards the entrance of the club. Next, they have to bail out of the motorcycle just before it enters the club. The motorcycle is supposed to be in the interior of the club. Now the player must enter the club. As Tommy walks out the door, all buildings (except the club itself) will disappear but they still seem to be solid. This is a way to easily find all Hidden Packages, because no buildings will block the view. Tested on iOS version.

In the 10th Anniversary edition, the models of the hands have been revamped and are much more detailed than they previously were. Occasionally, possibly due to script errors during cutscene, characters will appear with their hands missing, leaving them with stumps at the ends of their arms.

When the player carjacks someone, the owner runs away but some cars take Tommy out and throw him down, but the player can quickly enter on the other side of the door and the player will see the car owner is driving the car and with the player inside.

This glitch benefits the PC player with the ability to acquire property no-charge during replay. When the player meets the requirements such as enough cash and perhaps purchase unlocked after completion of Shakedown, instead of pressing 'tab' when standing in a purchase pick up, the green spinning house symbol, use the instant replay to 'tab' during replay, then the features such as garages, supplies and save points become available, forgetting to bill the player's cash. First, check that the player has permission and enough cash to purchase the safe-house or asset. Then stand in the spinning greenhouse for a few moments DO NOT press 'tab' yet. Press Function-2 (save replay) and stand there for 30 seconds or more. Walk away, somewhere away from the asset, or enter a vehicle to view another glitch. While away, press 'tab', then immediately press Function-1 (playback replay), press 'tab' while the replay player is seen standing in the purchase pickup. Then cancel the replay with Function-1 again. The purchase cut-away scene will play, the cash counter remains untouched, and then the player can utilize the asset/safe-house features. The pickup will likely display both the greenhouse simultaneously as the pink cassette tape save symbols merged together. Tommy's image may become momentarily mangled, or stuck in a vehicle, or the vehicle entered may vanish, after this otherwise beneficial glitch.

If the player is driving a vehicle on the road while looking backwards by holding the look left and look right button, no upcoming traffic will spawn.

Turning off the frame limiter in the setting menu on a modern PC which can run GTA Vice City over 30 frames per second, will cause numerous weird glitches to kick in. Examples are bullet traces not disappearing, traffic not moving or moving very jerky, driven vehicles being able to be pushed, wanted stars flashing and more.[1]

This rare glitch may happen if a cop tries to pull the player out of his car to bust him. Instead of running to the player's car as normal, an Ultracop will quickly float towards or teleport at the player's car door and pull them out, busting them instantly. The glitch is also present in GTA III. Its name was invented and popularized by the streamer community.

If a police officer chasing after the player is lured into attacking another pedestrian with his fist while having a low wanted level, depending on the kinds and in-game settings, the pedestrian will sometimes retaliate and attempt to fight back. If successfully, the officer will be hit by the NPC, but unlike the preceding title, the officer will not run away and just try to focus on the attacker and fight back instead of continuing beating the player up. Interestingly enough, the officer can still be heard seemingly taunting the player even if this happens. This glitch is somewhat common in some of the 3D Universe games, but gets eliminated in GTA San Andreas.

Players can access Starfish Island early in the storyline by performing the teleport glitch. Grab a motorcycle and head to the island's entrance. There, you will notice that there are two small closed gates in both sides of the road preventing pedestrians from entering or leaving Starfish Island. If you do a wheelie against the corner of the left gate and fall off the motorcycle, Tommy will be teleported to the sidewalk in the middle of the island and lose some health. A video showing the glitch can be seen here.

Tommy folded like a guitar origami after the 'Gimmie Shelter' glitch.
Add a photo to this gallery 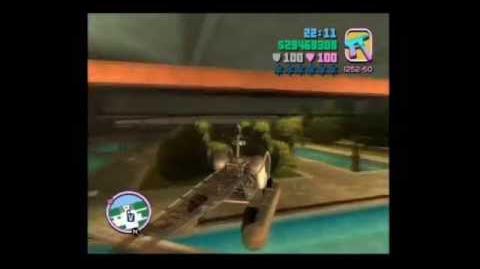 Retrieved from "https://gta.fandom.com/wiki/Glitches_in_GTA_Vice_City?oldid=1243715"
Community content is available under CC-BY-SA unless otherwise noted.