Designed as a 1950s/1960s sedan, the Glendale appears to be the result of joining two halves of two different real-life cars; the front resembles a 1955 Buick Special, with the headlights and roof from a 1957 Chevrolet Bel Air, while the back and sides resemble a 1961 Dodge Polara. The overall body also resembles a mixture of the first generation Opel Rekord, Maserati Quattroporte, and as well as the Rover P6.

While commonly featuring a two tone paint scheme along with the roof being set to white as the secondary colour, the Glendale in GTA San Andreas has a colour variation that is totally red — the roof color can also be modified in via a Transfender mod shop.

Along with the Broadway, Hustler, Savanna, Tornado, and the Voodoo, the Glendale in GTA San Andreas does not appear to have fuel caps but will explode if shot on the back vehicle registration plate, perhaps indicating that the car's fuel cap is behind the number plate like some cars in real-life.

“The definition of an understated German sedan.”
— Arena War description.

The Glendale was reintroduced in the I'm Not a Hipster Update for Grand Theft Auto V. No longer an American vintage saloon, the Glendale is based on the Mercedes-Benz W114/W115 (most likely a W115, as the car has a diesel engine) with headlights from the larger W108 and a grille resembling that of the W113. The rear fascia and taillights are based on the BMW E3. Overall, the vehicle is comparable to the 3D Universe's Admiral (which is based on a W123).

The front end of the car denotes classic styling, featuring a chrome bumper and grille, the latter bearing the manufacturer badge. The outer edges have chrome panellings that house two yellow headlamps, together with smaller turn blinkers. Two rectangle vents can be seen on the bonnet, near the windscreen. On the sides, more chrome trimmings can be seen on the lower sides and wheel arches, as well as chrome lines on the doors, handles and square rear-view mirrors. The greenhouse area features more chrome details around the windows and over the rearmost pillars. The rear end is predominated by the chrome detail seen between the tail lamps, holding the license plate. A chrome bumper spans the width of the car and a manufacturer badge can be seen on the boot.

In terms of performance, the car is only average, with an average top speed, mediocre acceleration, moderate endurance and average cornering. However, the Glendale seems to be quite durable, especially in comparison to newer cars. The vehicle's power-to-weight ratio may be a contributing factor to its below-average acceleration, as the car is heavy but possesses a weak engine, and as a result, is also a poor hill climber.

The Glendale is a heavy car; the weight plus a soft suspension and the somewhat weak engine means the car understeers through corners despite heavy throttle work, often resulting in spin-outs due to its terrible handling unless its ride height has been lowered in order to counter this. Poor weight distribution and body roll may result in the vehicle losing control easily, especially at high speeds, so lowering its suspension makes up for stability. The car's acceleration is above average for the majority of the sedan class, but is still mediocre to other car classes in general, even with upgrades. Despite these shortcomings, the Glendale has a good top speed. Durability is average for most sedans, as the car can only take a few head-on collisions before its engine fails.

The Glendale is powered by the same engine fitted to the Regina and Tornado, being a single-overhead camshaft V8 fitted with a cylindrical air filter. Despite being a sedan, the Glendale has the typical engine sound of SUVs and pickup trucks such as the Granger and the Bodhi, suggesting it is of a diesel type.

Installing any "Trunk" modification will increase its traction slightly, in the same way as a spoiler.

A comparison of the Glendale's side profile with the Oceanic's.

The Glendale on the updated Rockstar Games Social Club. 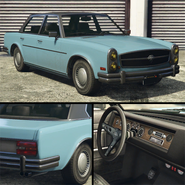 The beater variant of the Glendale in Grand Theft Auto: San Andreas.