View source
watch 02:30
Dead Cells Final DLC - The Loop
Do you like this video?
Play Sound
For ghost towns in the San Andreas, see Las Brujas or Aldea Malvada.

Ghost Town is the name given to the three-dimensional environment where the initial cutscene of Grand Theft Auto III (where Claude is helping Catalina rob a bank, before being betrayed and shot) takes place. This area has an actual location in the game map, which is set isolated from the 3D era rendition of Liberty City — the game's regular setting because it is not intended to be accessed during normal gameplay. Despite being almost entirely non-solid, the area has elements of a normal large city, such as streets and stores.

In The Definitive Edition of Grand Theft Auto III, the area only spawns during the Introduction cutscene, and can no longer be found during normal gameplay.

The Ghost Town is basically a street with the Liberty City Bank, some stores and apartments, and a Mr. Wongs, an Esperanto, and three Securicars parked on the street.

The Ghost Town is noticeably more detailed than Liberty City itself; the alley behind the bank contains dumpsters, cardboard boxes, and even various items of garbage strewn across the ground. Most of the apartments above the alley/streets also feature air conditioning units on the windows, like some buildings in real-life. The sidewalks, however, are empty, with the exception of a few street lights and parking signs.

Rockstar Games' official response concerning Ghost Town's existence is that "We didn’t take an island out of the game. There were only ever the three. We think what people refer to as 'ghost town' is just the small area of a city we built for the bank heist scene at the very start of the game. It never had a name, but we wanted it to be somewhere separate from the liberty map and so we built these few streets floating in space and assumed no one would ever find them".[1]

The streets of the Ghost Town.

The backside of the Liberty City Bank.

The front side of the Liberty City Bank.

The 'Ghost Town' as seen through the Shoreside Vale upstate hills.

During gameplay, it can only be accessed by flying the Dodo there, but can also be seen through the upstate hills area of Shoreside Vale, with the help of a sniper. Very few of the objects are solid, and those that are solid are tiny props (two wooden crates behind the Liberty City Bank and the lamps), so there is nowhere to land. If using cheats, the flying cars cheat can also get the player to the Ghost Town. There are two modifications that allow the player to reach the Ghost Town easily via bridge. One just solidifies the Ghost Town, and the other solidifies it and adds in some buildings, and extra room. Half of the small landmass is located above water and the other half is located over a large entrance into blue hell along with others seeing as how the backside of the hills aren't complete, and the player can see into Shoreside Vale and the entire layout.

The graphic bug is named the 'Ghost Town' as of the buildings and roadways being unsolid like a Ghost, and the fact that the area is void of any pedestrians or vehicles. Even when using the Solidified Mod or the Bridge mod, the first part of the road is not solid and will just drive you into a waterpatch. The Mod also adds ground next to what normally would just be road and a few buildings. The player can walk and drive through every building, and jump into the gaping blue hell entrance which is also seen in Upstate.

In Grand Theft Auto: Liberty City Stories Ghost Town doesn't exist, since it was not needed. In 1998 there is some evidence leading to the actual name for the part of the city with it being Upstate. The reason for this is in both GTA III and GTA Liberty City Stories, there is a road tunnel up in Cedar Grove. In 2001 the tunnel is inaccessible (even if the player somehow manages to get behind the roadblocks, the small area isn't solid). In 1998, though, the tunnel can be entered. In the middle there is a road that is blocked off for unknown reasons. This road is not accessible, but is with the help of a helicopter. No part of the road is solid and the road also would appear as if it was going uphill. The very end of the road has no wall or anything in front of it; it stops and dangles above Blue Hell. Also close to the location of the small strip of land there is a pipeline to what would appear as one from The Mars Gas Corporation. This was placed as a boundary which would also be absent in GTA III, however the player is able to fly under it but not over it. 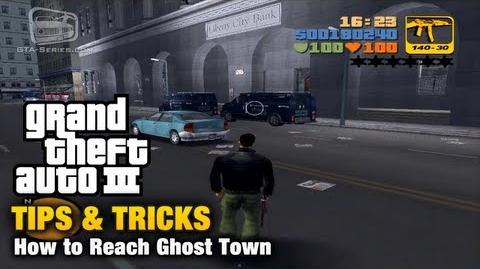