GTA Wiki
Register
Don't have an account?
Sign In
Advertisement
in: Missions, Missions in The Lost and Damned, End Missions
English

Thomas Stubbs: "Nice place you've got here, Johnny - not quite sure I meet the dress code, but I think I like the smoking policy."
Johnny Klebitz: "What the fuck do you want?"
―Thomas Stubbs to Johnny before telling him about Billy.

Get Lost is the final storyline mission in The Lost and Damned, given by Thomas Stubbs to Johnny Klebitz. By matching up the timelines, it is known this mission takes place before Niko encounters Darko Brevic in the original game.

Congressman Thomas Stubbs calls Johnny shortly after Was It Worth It? (alternatively, Johnny can call Stubbs first) and asks Johnny to meet him at the Lost MC Clubhouse. Johnny meets Stubbs at the clubhouse, where Stubbs advises Johnny not to worry about Ray Boccino, as he and his associates will not be around much longer and Johnny should stay away from them. However, Stubbs informs Johnny that Billy Grey is planning to pin a major drug operation on Johnny and Angus Martin, which will send them to prison and allow Billy to enter the federal witness protection program.

Johnny rides to the Alderney State Correctional Facility. When he arrives, a cutscene plays showing Billy talking to a fellow inmate about his impending release. Outside the prison, Johnny calls Terry and tells him to bring his weapons van. Terry arrives in his van, with Clay Simons and the remaining Lost brothers. When Terry arrives, Johnny receives free weaponry as he explains to Terry that they are for Club use.

Johnny blows up the prison doors and leads the members on an assault, killing several prison guards and fighting their way through the prison compound.

Johnny eventually locates and confronts Billy, who challenges Johnny to kill him. Johnny hesitates, but eventually kills Billy when he tries to lunge at Johnny with a knife.

After Billy has been killed, Johnny and the members fight back to the prison entrance, killing several NOOSE officers who have arrived. When they arrive at the entrance, Johnny leads Terry and Clay out of the prison.

When Johnny is clear of the prison, he leads Terry and Clay back to the clubhouse. When they arrive at the clubhouse, they find that it has been ransacked while they were gone. With everything destroyed beyond repair, Johnny, Terry, Clay and Angus take a brief moment to reminisce and remember the Club's glory days, before Johnny tells Terry to "put the place out of its misery". Johnny, Angus and Clay leave the clubhouse while Terry douses it with gasoline and sets the building on fire, before joining the others outside. The remaining members of the Alderney Chapter watch on as the clubhouse burns to the ground.

"After the recent murderous incident at Alderney State Correctional Facility, a security review is being called for. Sally Butters of Moms for a Police State says she's "sick and tired of criminals stealing from us. We want to put them to work in order to make the US economy the powerhouse it once was. The private medical sector has worked so well for this country, why can't we privatize everything?""

"Certain liberal groups have blamed the incident on strict prison rules. They call for regular meditation sessions and Reiki training for all guards. Earth-Song Bowden, a campaigner for prisoner rights, says "most violent tendencies can be traced to a misalignment of Chakras. We need to treat the cause of the problem. Not the symptom." Whatever the reason for what happened, something has to change at Alderney State. Parents have enough to worry about with terrorists on the loose and our economy failing, our prisons must remain secure."

"As horrible as recent events in the Alderney State Correctional Facility have been, there are reasons to be grateful for it. The secular morons will now stop their whining and we'll be able to bring in the two things that might help our prisons - corporal punishment and prayer. These men don't deserve human rights. They lost their rights when they ran that red light or sold that dime bag of weed to a teenager. We need to beat'em and make'em atone for their evils. There's nothing in this world that can't be corrected by a little prayer and a beating or two (a day) - my son is the perfect example. A strict course of flagellation and prayer sessions cured him of his homosexuality. Now he lives a happy and totally straight life in Westminster with his hairdresser roommate." 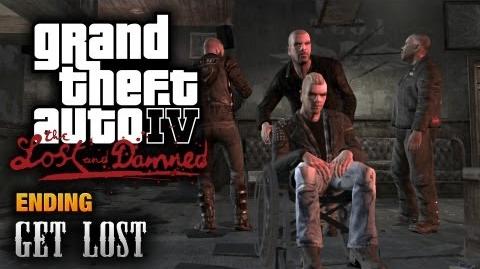 Stubbs tells Johnny about the prison.

Billy Grey in the prison talking to another inmate.

Johnny blows up the prison doors with a Rocket Launcher.

Johnny, Terry and Clay attack the guards in the prison.

The Lost Brotherhood pushes deeper into the prison.

NOOSE forces get called for backup.

Johnny and his crew don't back down from a fight with NOOSE. 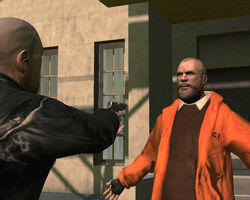 Johnny gets closer to Billy, getting ready to shoot.

Johnny shoots Billy after he attempts to attack Johnny with a Knife.

Johnny follows Terry and Clay out of the prison.

Johnny and his brothers escape the mayhem.

Johnny leads the bikers back to The Lost Clubhouse.