PJ Sosko
“All we've ever been is bitches. Working for guineas, working for ni**ers, any asshole with a buck. The whole lot spent in the proper manner, oh yeah, wine and women, as quick as possible, and remain a slave forever.”
— Gerald McReary to Niko Bellic in Actions Speak Louder than Words.

Gerry is the middle child of the McReary family. Gerry was the leader of the Irish Mob, until he got arrested.

Gerald McReary was born in 1973 and he is the third son of Maureen McReary and Mr. McReary. He is the younger brother of Derrick and Francis, and the older brother to, Patrick and Kate, would be born during his childhood.

Gerry was always involved in family conflicts with his older brothers, and was also beaten and molested by his father. This violent and abusive environment appears to have hardened Gerry into a bitter and violent drunkard, much like his father. It's also likely the reason why his life of crime began at the startling age of 13, when he was arrested for grand larceny.

At some point Gerry's father died and he became the leader of the McReary mob, as Derrick left for Ireland, and Francis joined the LCPD.

Gerry made an alliance with the Pegorino crime family Capo Ray Boccino, who used them to weaken the Ancelotti Crime Family.

“...and you. Nothing personal, but don't fuck with my family, or I will fuck with yours.”
— Gerry threatens Niko

When Niko first meets Gerry, he is heavily inebriated, making him very capricious. He belittles his brothers and Michael Keane, a friend of the family. Immediately after, he warns Niko to never hurt his family, or he will hurt Niko's.

Later after that mission, he calls Niko saying he has work. Niko comes over to visit a now sober (and less hostile) Gerry. His first mission involved Niko putting a Car Bomb under Anthony Spoleto's car then detonating it when he reaches a meeting between himself and his Ancelotti crew. Gerry then has Niko disguise himself as an Albanian; wearing the biker jacket he acquired. And wearing that outfit, assassinate Frankie Garone; the goal of these two missions are to damage the Ancelotti-Albanian relationship and create tensions.

Gerry is arrested for racketeering offenses and is incarcerated in the Alderney State Correctional Facility not much time before funeral of his brother. Packie mentions that the "charges won't stick", but this is contradicted as there was more evidence against Gerry than they had believed. After the funeral, he has Niko visit the prison to tell him to kidnap Gracie Ancelotti in order retrieve the Diamonds, which were stolen by Luis Lopez, after breaking up the museum deal (he then needs to take a picture of her with his Whiz mobile phone). Afterwards, Gerry has Niko transfer Gracie from one safehouse to another because Luis and Tony found her.

Then, he gives Niko his final mission. This mission has Niko Bellic and Packie McReary swap Gracie for the Diamonds held by Luis Lopez and Anthony Prince. At the exchange, Gracie is successfully returned; unfortunately, Ray Bulgarin and his men disrupt the deal. Luis, Tony and Gracie escape the scene and the guy who chased him. Unfortunately, one of his men stole the Diamonds; when Niko and Packie cornered him after taking out the others, he threw the Diamonds in a truck. Gerry bids Niko farewell and reveals he will be in prison for a long time, potentially up to fifty years, before asking Niko to keep an eye on his family for him.

Gerry appears to have a violent temper. During Waste Not Want Knots Packie dares Gordon to criticize the McReary stories to Gerry's face; in the ending cutscene for Diamonds Are a Girl's Best Friend Packie confesses to Niko that he's still worried about Gerry's reaction to the failure of the deal, despite his brother being in prison. Gerry also threatens Niko during their first encounter, though he later mellows and becomes more trusting of Niko; even asking Niko to look after his family should he end up incarcerated. 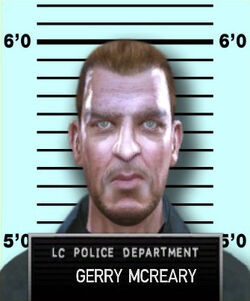 Gerry, as seen in "Actions Speak Louder than Words" mission.

Gerry and Niko talking as seen in mission "I Need Your Clothes, Your Boots, and Your Motorcycle".

Niko visiting Gerald in prison in the mission "I'll Take Her".