"You got anything else interesting, bring it my way."
―Gerald to the player.

Gerald is an associate of Lamar Davis, as well as a drug dealer for The Families based in South Los Santos.

The player is introduced to Gerald through Lamar. Gerald serves as a mission giver to the player; he often gives the player missions of stealing drugs from other dealers and gangs - usually the Vagos or The Lost MC, after the online player starts working for Gerald.

Later on Gerald would get arrested because of Lamar's actions with a lowrider delivery for Family OG Vernon. Gerald would have been transported out of Los Santos by plane, likely to Bolingbroke Penitentiary, but would eventually be rescued by Online Players sent by Lamar during the transport at the airport. Gerald would later appear again with Lamar at the end of the mission Point and Shoot after the Online Players delivered the lowriders to his apartment.

While Gerald doesn't physically appear in GTA V, a Lifeinvader post can be seen telling Lamar to stay away from him. [1] It's possible that he told Lamar this because he is still mad about the events because of Lamar's actions in GTA Online and doesn't want to speak or have anything to do with Lamar during the course of GTA V.

In 2020, Gerald messages the protagonist asking they to help him on his drug selling business. The goals vary, with objectives such as assassinating gang bosses, stealing drugs from other gangs, or delivering drugs to buyers.

Gerald is referred to as anti-social by Lamar, which appears to be true, as Gerald goes back to his apartment soon after meeting the player. He appears to be a paranoid person with difficulty to trust new associates, as he hesitates to meet the player, and often tells the player to keep his/her mouth shut after delivering drugs to him.

He is a quiet person, often saying short words or sentences like "Nice" or "All right" when meeting or messaging the player. He is more serious than Lamar when it comes to business, and appears to get annoyed by him. In general, he seems to have a low opinion of Lamar and speaks badly of him to the player over the phone.

Gerald is an African-American man of an average size, and is slightly overweight. He wears a white fedora hat, sunglasses, a black & silver "LS" necklace, a black t-shirt, and blue jeans.

Gerald awarding the player for a successful drug delivery.

Gerald in police custody during It's a G Thing. 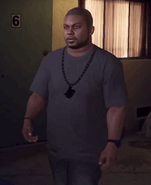 Gerald's alternate attire.
Add a photo to this gallery

Retrieved from "https://gta.fandom.com/wiki/Gerald?oldid=1286449"
Community content is available under CC-BY-SA unless otherwise noted.