• ­Average Car
• ­Has Interior Extras
• ­Can Have Neons
• ­Has Supercharger

"What is a car for, if it's not for getting from A to B? And what's the point of A and B, if they're not a quarter of a mile apart on a flat surface in a straight line? These are the questions Bravado asked themselves, and the Hellfire was the answer. Give it what it needs, and this thing will immolate just about everything else on four wheels. Turn that funny-looking wheel in the middle of the dash even a little bit, and you're as good as dead."
―Southern San Andreas Super Autos description.

The Bravado Gauntlet Hellfire is a muscle car featured in Grand Theft Auto Online as part of the continuation of the The Diamond Casino & Resort update, released on September 5, 2019, during the Gauntlet Hellfire Week event.

The Gauntlet Hellfire is regarded as the successor to the Gauntlet, as evidenced by the more modernized, wide-body profile from the 2018 Dodge Challenger SRT Demon. It also has some design influence from the 5th Gen Chevrolet Camaro, particularly its rear lights. The rear bumper and diffuser seem to be derived from the 6th Gen Ford Mustang. The name "Hellfire" is derived from the Dodge Challenger SRT Hellcat and the "A/C" badge on its hood is based on the R/T performance marker.

The car's interior is almost completely reused from the Specter, being a modern, paintable interior named "Muscle White". It features slightly different door card textures, but is otherwise the same as the Specter's interior.

The Guantlet Hellfire's performance is opposite to the Dominator GTX, a similarly priced and same generation muscle car that has decent handling but poor speed and acceleration.

The Hellfire has the highest top speed in the entire muscle class[1], its acceleration is excellent, making it great for speeding in a straight line. Handling is average at lower speeds, but the vehicle is prone to sliding and even spinning out in turns, and easily lose control when hit during higher speeds. It also does not have a very good turning radius, yet this can be mitigated by a skilled driver. Braking is the same as the Gauntlet Classic.

The Gauntlet Hellfire has one (the eleventh) Advanced Flag enabled.[2] The purpose of this flag is unknown, but it appears to have little impact on performance.

The vehicle is powered by a single-cam V8 engine coupled to a 5-speed gearbox in a front-engine, rear-wheel-drive layout. It shares the same engine sound as the Tampa and Nightshade. 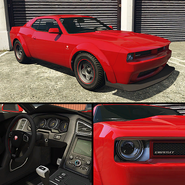 The Gauntlet Hellfire on the updated Rockstar Games Social Club.

The Gauntlet Hellfire in the cinematic preview on Rockstar Games Social Club.

Alternative badge used in an advert, which is derived from the Gauntlet Classic.
Add a photo to this gallery

Retrieved from "https://gta.fandom.com/wiki/Gauntlet_Hellfire?oldid=1237951"
Community content is available under CC-BY-SA unless otherwise noted.