Standard White - 100%
“In this world, there's muscle, and then there's muscle. Like, you technically have muscles. And then there's that guy you went to school with. The one who posts Snapmatic selfies that look like someone spray-tanned a T-bone steak. Well, the Bravado Gauntlet just ate that guy, washed him down with a supercharged protein shake, and threw its arm round his mom at the drive-in. This is muscle. Anything else is just flab.”
— Southern San Andreas Super Autos description.

The Bravado Gauntlet Classic is a muscle car featured in Grand Theft Auto Online as part of the continuation of The Diamond Casino & Resort update, released on August 8, 2019, during the Gauntlet Classic Week event.

The vehicle features a narrower front end with a similar arrangement to its modern counterpart, featuring an open section on the center that exposes the radiator and two small circular high-beam lights on the outer sides, along with a small silver/chrome bumper above. The upper area features a rectangular mesh grille with the surrounding and horizontal divider finished in silver/chrome, while the sections beside it have dual circular main headlights on silver/chrome housings. These headlights have a special animated "fading" effect when turned on and off, in a similar manner to vehicles such as the Dukes and Ruiner 2000. Its hood sports a small bulge and a cut-out for the scoop, while the Bravado emblem can be seen on the front.

The sides of the car are relatively simple, having a wider profile around the middle and slightly flared arches. There are yellow vertical marker lights on both ends, silver/chrome strips on the skirting area and "Gauntlet A/C" badges on the front fenders, while the doors have horizontal door handles and classic mirror wings near the A-pillars of the cabin. The cabin area is relatively basic and uses silver/chrome trimming around the windows.

The rear end of the car is rather unique, featuring an inset section with a black panel and silver/chrome detail on it. The center of the black panel bears the same "Gauntlet A/C" badge from the sides, while the outer portions are occupied by four red square tail lights, the central ones bearing "BRAVADO" textures. The lower area mainly consist of a small silver/chrome bumper similar to the front one, a central section intended for the license plate and circular reverse lights similar in appearance to the front high-beam lights. The bottom area has two mouldings for the dual exit, dual circular exhaust tubes.

The vehicle uses its own dedicated interior, using wooden dashboard panelling with silver/chrome trim around, as well as rectangular air conditioning units and a glovebox compartment on the passenger side. The dials are derived from the Dominator and the Gauntlet, but surrounded in silver/chrome trim and arranged in a way that the main dials are larger and placed beside the steering column, while the four gauges are located in the center, just above the radio set. Being a classic muscle car, the vehicle sports various classic details around, being a classic steering wheel with a gray variation of the Bravado emblem, Bravado-branded floor mats, traditional foot pedals and a classic gear shifter, as well as wooden panelling on the central lower section and doors. Beside the tachometer, there are small switches that provide some of the basic functions of the car.

The vehicle's primary color is applied on the bodywork, while the secondary color is applied on the roof and the engine cam covers. A trim color is also available for most of the interior, including the dashboard, steering wheel, door panels, and interior stitching. The wheels have a unique rim design, consisting of eight circular details around a protruding center, wrapped in high-profile tires with detailed tread pattern.

The Gauntlet Classic has a relatively nippy handling and has admirable grip around corners. In addition, the car does not spin out as easily as its original counterpart, and in an event of a spin-out, it can be easily corrected. Its suspension is relatively stiff and doesn't lose control over bumps and curbs, and its braking power is excellent. It can also take punishments relatively well from collisions and gunfire. Similar to the Ellie, the Gauntlet Classic has a relatively high acceleration along with its decent top speed, but not enough to keep up with faster Muscle cars.

The Gauntlet Classic has one (the eleventh) Advanced Flag enabled.[2] The purpose of this flag is unknown, but it appears to have little impact on performance.

The car is powered by a single-cam V8 engine, coupled to a 5-speed gearbox in a front engine, rear wheel drive layout. It shares the same engine sound as the Imperator. 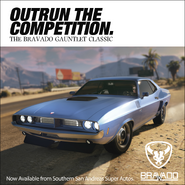 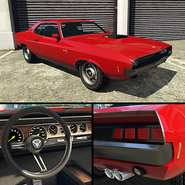 The Gauntlet Classic on the updated Rockstar Games Social Club.

The Gauntlet Classic in the cinematic preview on Rockstar Games Social Club. 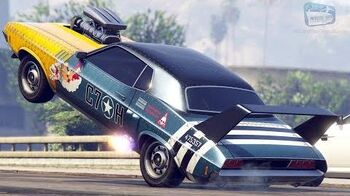 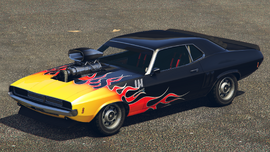 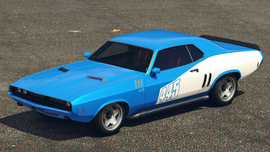