View source
watch 02:56
Raise a Floppa - The Loop
Do you like this video?
Play Sound
For the mission in Grand Theft Auto V, see Gauntlet.

Yes
“An American muscle car in a class by itself. Roll down the windows and scream in testosterone-filled rage as you gun the engine while stuck in traffic. DNA wipes easily off the leather seats.”
— Southern San Andreas Super Autos description.

The Gauntlet is heavily inspired by the 2008-2013 Dodge Challenger, based on its distinctive body shape, with lines that are flared and smooth, and iconic hood scoops. It also sports styling cues from the 1970s E-Body muscle cars, with side scoops like the 1971 Challenger R/T. The Gauntlet also appears to feature actual sealed beam headlights, rather than the Challenger's modern retro-inspired headlights, while having a grille that resembles the fifth generation Chevrolet Camaro. Its rear end draws heavily from the Challenger, though the taillights are closer to the ones on the fifth generation Chevrolet Camaro.

The front end of the car has a slight pointy shape, where the bumper houses a meshed central intake that is about half the car's width and two circular fog lamps beside it, as well as the license plate mounted in front of the intake. On the upper area, the car features four horizontal grille separations on the center, while the outer edges have black housings with dual circular headlights. The hood has a bulged shape on the center that is wider on the rear half, while the Bravado emblem can be seen on the front.

The sides are mostly traditional in appearance, featuring flared arches and thin vertical intakes on the rear fenders, intended to cool off the rear brakes. Silver "GAUNTLET" lettering can be seen around the rear quarters of the vehicle, while the front fenders bear "450cui Turbocharged" badging. The greenhouse area is relatively simple and features black trim around the windows, with black separations between the door and rear-quarter windows, along with colored mirror wings.

The rear of the car is very traditional, featuring semi-circular tail lights with chrome details on either side, together with the Bravado emblem on the central section. A black section can be seen at the bottom of the bumper, which spans almost the entire width of the car and houses two rounded exhaust tips on the edges. The license plate can be also seen on the center of the black section.

In the enhanced version, the interior of the Gauntlet is shared with the Dominator, the Buccaneer and the Ruiner, using the same textures and dial set. The steering wheel bears the Bravado emblem on the center.

Most of its bodywork is painted with the primary color, while the secondary color is present in the form of a wide stripe running across the whole vehicle, starting from the hood and continuing to the trunk, also going down onto the rear bumper. The car uses seven-spoke rims also shared with the Radius, which looks very similar to certain custom muscle rims seen in Los Santos Customs, wrapped in low-profile tires.

The Gauntlet has a strong 450cui single-cam turbocharged V8 engine and high acceleration, capable of going from 0-60 in a matter of seconds, along with an above average top speed, only beaten by the Dominator. However, it has a moderate tendency to spin out. Its engine is coupled to a 5-speed gearbox in a front engine, rear wheel drive layout. It uses a high-revving and aggressive engine sound, being also shared with the Sabre Turbo, the Picador and the Buffalo S.

A Gauntlet being modded for a Heist.

The Gauntlet on the updated Rockstar Games Social Club.

The Gauntlet in the cinematic preview on Rockstar Games Social Club. 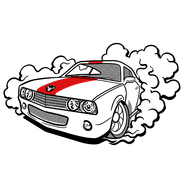 A Gauntlet on a graphic of Bravado Stylized Tee in Grand Theft Auto Online.