21:00:00
“A'ight, word is the Vagos got a new connect for the cocaine they bringing cross border. These some professional dudes who can distribute weight, so you know we wanna screw that up. First Exchange is happening at the Los Santos Stage Gas Company in Cypress Flats. Take 'em out and bring the package round my spot.”

Gassed Up is a mission in Grand Theft Auto Online, given to the player by Gerald. It is available for up to 4 players.

The Vagos have now a new connection, some drug dealers who are bringing drugs across the border. Gerald is interested in the cocaine that they are handling and orders the team to go there and steal the drugs. The meeting is taking place at the The Los Santos State Gas Company's storage tanks in Cypress Flats. Once all the people involved are killed and the team gets the drugs, several Vagos will come after the team in Ballers to get the drugs back, shooting the tires, which can make the way to Gerald's apartment difficult. After the team kills them all or simply loses them, they just have to get the cocaine to Gerald's apartment. 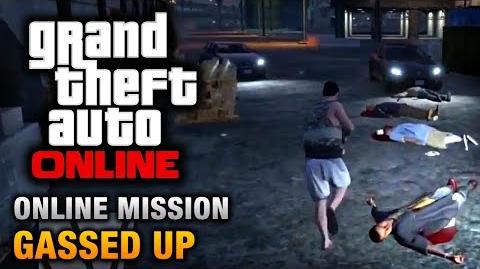