GARGOYLE
“Ah, the age-old question: how do you get a cool vintage motorbike up a near-vertical hillside strewn with dust, rocks and the remains of lesser drivers? Forget carbon fiber panels and onboard computers. Sometimes a simple problem requires a simple solution, like a rear tire taken from an Armored Personnel Carrier and wrapped in steel chains. Time to get back to basics.”
— Southern San Andreas Super Autos description.

The Western Motorcycle Company Gargoyle is a hillclimber motorcycle featured in Grand Theft Auto Online as part of the Cunning Stunts update.

The Gargoyle appears to be based on a 1928 Indian 101 Scout that has been modified into a hillclimber, also appearing to receive a more robust body.

The vehicle has a very basic design with little body paneling, where the front forks are joined by an upper panel covering the triple clamps, whose lower side houses two small circular headlights. The handlebars are connected to the upper plate by dual supports and has an horizontal bar on the center.

The main body of the bike features a covered radiator, which cools the engine directly behind it. The fuel tank spans the whole upper side of the engine block and houses the "Chopper Bike" dial and warning lights derived from motorcycles such as the Bagger and the Police Bike. A vintage springed seat can be seen just behind the fuel tank, along with foot pegs below for the passenger. The engine bay has a shield-shaped air filter bearing a chrome detail around it and a silver cursive "G" on the center, along with two exhaust pipes that merge into one single pipe.

The rear area consist of a short rear fender and a grey dual-sided swingarm, which is supported by two suspension springs. The left side has the corresponding chain drive and the two corresponding sprockets, the front one being exposed from the engine bay, while the right side has a single black exhaust pipe that bents upwards on the end. A small circular red tail light can be seen on the left, at the end of the swingarm.

The primary color of the vehicle is applied on the front panel, around the front radiator cover, the fuel tank and the rear fender, while the secondary one is applied on the triple clamps, around the front radiator cover, the sides of the fuel tank, the portion between the engine bay and the rear wheel, and the sides of the rear fender. It uses a set of wheels appearing to be a derivative of the "Wires" rims seen in Los Santos Customs, but wrapped in high-profile tires with a very detailed tread pattern, along with tire chains wrapping the rear tire (a typical trait for hillclimbers). 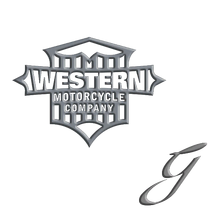 The bike performs very similar to the Hexer, having very similar handling and braking. The bike has good traction thanks to the rear tyre wrapped with chain, meaning the wheels do not spin when vigorously setting off. The motorcycle also has good handling thanks to a large steering radius.

As expected, the bike has a large V-Twin engine model with a distinctive odd-firing idle sound, appearing to use a louder variation of the engine sound used on vehicles like the Daemon and the Hot Rod Blazer. It has a 4-speed gearbox. 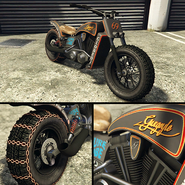 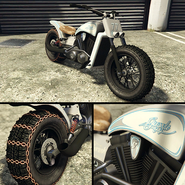 The Gargoyle on the Rockstar Games Social Club.

The Gargoyle on the updated Rockstar Games Social Club.

The Gargoyle in the cinematic preview on Rockstar Games Social Club.