The Gant Bridge is a suspension bridge in Grand Theft Auto: San Andreas. It is part of the Las Venturas Highway connecting San Fierro with Las Venturas.

The bridge is clearly modeled after the Golden Gate Bridge in San Francisco, but is shorter and tends to be bathed only in a low morning fog. Like the Golden Gate Bridge, the Gant Bridge is a suspension bridge supported by two pillars and painted International Orange. Other similarities include a toll plaza on the San Fierro side, and a large steel latticework structure supported by concrete and built over an old fort at Battery Point and into the hillside, providing the anchorage on the San Fierro side.

According to the bridge facts sign in the Visitor Center, the total length of the bridge is 159.7 m., but it is obviously much longer; The measured distance by car from end to end is approximately 785-787 meters. Other than the similarity to the Golden Gate Bridge, the Gant Bridge is not a particularly necessary roadway in the city, given the presence of the Garver Bridge to the east. The small freeway that comes off the bridge in San Fierro ends unexpectedly on a relatively minor road in Downtown San Fierro, instead of connecting with something more major.

The bridge appears to be undergoing some refurbishment, as its southeastern side has scaffolding. This scaffolding provides Carl with access to a hard-to-reach area in Ice Cold Killa, and the end of the scaffolding forms a unique stunt jump; however to do this jump requires Carl to sacrifice his motorbike and shouldn't be attempted until a) the Desert area opens up (otherwise the jump fails due to the "invisible wall" preventing Gant Bridge from being crossed prematurely) and b) Carl completes the Paramedic mission and receives enhanced health. This is due to the fact Carl may land on the concrete pillars of the bridge far below rather than in the water; this is fatal if Carl doesn't receive the extra health boost provided by completing the side mission.

An Easter Egg can be found on the top of the southern suspension tower - a sign that reads "There are no Easter Eggs up here. Go away." A parachute can also be obtained on top of the northern tower.

The Gant Bridge Visitor Center, which consists of a "gift shop, boring museum and tourist information", is situated on the San Fierro side of the bridge, on both sides of the border between Paradiso and Juniper Hollow. Although the building housing the gift shop and museum are inaccessible, a handful of trivia about the bridge are exhibited outside, and an adjoining pedestrian bridge and walkway at the back leads to the San Fierro end of the bridge. A small diner, also inaccessible except while on a date with one of Carl's girlfriends, is also adjoined to the gift shop and museum.

A slice of cable from the bridge is situated on a plinth in the grounds of the visitor center. The sign above it reads:

The exhibit is seemingly based on a similar display near the Golden Gate Bridge.

Another large sign (of lower resolution than others) is also present in the visitor center, near the far end of the center. In the original GTA San Andreas, it reads:

The southern San Fierro end of the bridge over Battery Point, with Jizzy's Pleasure Domes underneath.

The Gant Bridge (unpaid) tollbooth on the San Fierro side.

The "There are no Easter Eggs up here. Go away." sign on top of the Gant Bridge's northern suspension tower.

An "Actual Piece of Cable" at the visitor center, with a placard above.

A visitor center sign containing facts about the Gant Bridge. 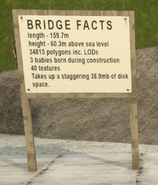 A Hunter "floats" above The Gant Bridge.