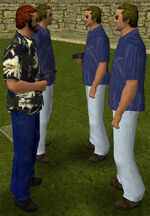 Also known as the Vercetti Crime Family, the Vercetti Gang is a powerful criminal organization led by Tommy Vercetti. They are based across Vice City, though the Vercetti Estate has been their main headquarters since the death of Ricardo Diaz to Tommy in 1986.

Their leader is Tommy Vercetti, though it also features high ranking associates like Lance Vance (until his betrayal), Ken Rosenberg (until 1992) and Avery Carrington.

After the events of the game, they are considered to be the most powerful criminal organization in Vice City, since the Forelli Crime Family, the main enemy of the organization, was weakened by the death of it's Don, Sonny Forelli, at the hands of Tommy.

The Forelli Crime Family is a mafia family primarily based in Liberty City. The Don of the family is Sonny Forelli, but in 1986 Sonny decides to move some of his business" down south" to Vice City, sending Tommy Vercetti, who had just got out of prison following Sonny's attempt to kill him in an ambush in 1971, and Ken Rosenberg to make an important deal with the local crime organizations.

The deal with the Vance brothers, organized by drug lord Juan Cortez, gets ambushed by Ricardo Diaz's goons. Only Tommy, Ken and Lance Vance survive and Tommy loses both Sonny's drugs and money from the deal. Throughout the game, Sonny calls Tommy threatening him and telling him to get the money back in whatever way possible.

Later in the game, Sonny will send goons to "tax" Tommy's businesses, beating up Earnest Kelly. Tommy kills the goons.

Sonny comes personally to Vice City to take the money from Tommy. Because of Lance Vance, Sonny is warned of the plan to give Sonny fake money. Due to this, Sonny faces Tommy, resulting in a shooting at the Vercetti Estate, which ends in the deaths of both Lance and Sonny at hands of Tommy, ending the storyline and Forelli incursions "down south".

They don't appear roaming through Vice City and are only seen thrice in the storyline and only twice in gameplay, in which they are aggressive, in fact, they are counted as Streetwannabes in the in-game stats despite being a key aspect of the storyline. 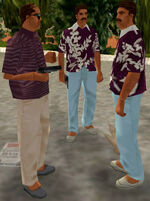 Diaz' Gang, was a powerful Colombian cartel headed by Ricardo Diaz. It's base of operations was the Vercetti Estate before Tommy Vercetti and his gang took it over.

They are likely associated with the Colombian Cartel, since some of their members in Grand Theft Auto: Liberty City Stories mention that they used to own a mansion in Vice City.

Following the demise of the Mendez Cartel at the hands of Vic Vance and Lance Vance in 1984, by 1986 Diaz' Gang has grown to be the most powerful organization in Vice City. Diaz, angered by the fact that the deal between the Vance Brothers and the Forellis was organized by Juan Cortez and not him, sent three goons to ambush the deal, killing Victor and several of Forelli's men.

Ricardo gives Tommy and Lance some work, however Lance, who gets into the organization by using a different name, later attempts to kill Diaz before Tommy was ready; because of this, he fails and ends up being tortured by Diaz's goons. Tommy saves him and together they assault the mansion, finally killing Ricardo Diaz.

Following his death, Diaz's gang disappears from Vice City, and are replaced by Vercetti gang members, ending their influence in the city.

Before they disappear, they are completely neutral to Tommy while free-roaming. They will only attack in self defense and will fight the Patrol Invest Group if they get onto the mansion grounds. 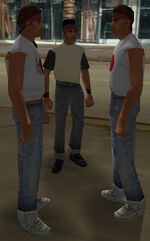 The Cubans (also known as "Los Cabrones" in Grand Theft Auto: Vice City Stories) are a Cuban street gang. They are led by Umberto Robina and their turf is made up of primarily Little Havana.

By the events of 1986, the Cubans are involved in a war against their main rivals, the Haitians gang, to become the dominant gang in Little Havana. After some time, Umberto Robina contacts Tommy and hires him to help in the war against the Haitians.

Following this, Tommy goes back to the Cubans and blows up a Haitian drug factory. Following a shootout, the Cubans are victorious over the Haitians and the Cuban-Haitian Gang War comes to an end.

Despite the Cubans' victory, Haitians can still be seen on the streets and both sides will fight if in contact with the other.

Vercetti Gang members will also fight with Cubans even though Tommy is allies with both. The Cubans will only attack Tommy directly if he initiates combat first or tries to steal one of their cars. 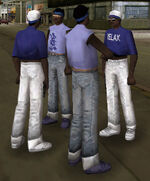 The Haitians are a Haitian street gang. They are led by Auntie Poulet. Their turf is primarily Little Haiti, though during the events of the game they show interest in taking over Little Havana from their main rivals, the Cubans. 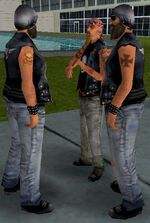 The Vice City Bikers are a motorcycle club in Vice City. They are led by Mitch Baker. Their turf is based primarily in Downtown Vice City, specifically in the Moist Palms Hotel where members can frequently be seen hanging out, though their club house, The Greasy Chopper, is most likely their headquarters. Two members can also be seen hanging out in the Pole Position Club.

Mitch describes his gang as "the biggest family of misfits, outcasts and badasses". The main difference between the Bikers and other gangs is that they're the only gang that uses motorcycles instead of cars as their main mode of transport.

In 1986, Mitch meets Tommy Vercetti when Tommy comes to him asking for protection during the Love Fist concert. Mitch tells Tommy that before the Bikers can give protection, he must prove himself to them by doing missions for Mitch, including racing other Bikers and stealing Mitch's bike back from the Sharks. After Tommy steals back the bike, Mitch will call Tommy telling him that he has the protection for the concert, and here ends the Biker's involvement in the main storyline.

Despite them being allied with Tommy, Vercetti Gang members will still attack any bikers that they see roaming around Vice City. 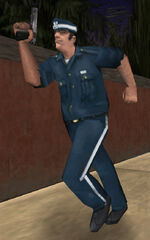 Also known by their acronym, PIG, the Patrol Invest Group are a legitimate security force that is part of DBP Security.They are however involved in several illegal protection rackets with the Vice City Triads.

Their legal operations include patrolling the North Point Mall, Escobar International Airport, Leaf Links Country Club, and Starfish Island, which could be considered their "turf".

Even though they don't strictly appear as a gang, the in-game stats classify them as so, listing them as "security guards" in the Gangs section. Besides that, they can sometimes also be seen being chased by the Police and if hit while in chase, Tommy will be given the "Good Citizen Bonus" of $50.

During the storyline, they are not as important nor as powerful as the other gangs, though they do make quite a lot of appearances, such as protecting Alex Shrub, Love Fist and a counterfeiting protection business for the Vice City Triads. Their most prominent appearance is when they try to attack Tommy's protection rackets in Ocean Beach, for which Tommy kills the guards involved and destroys the local PIG office.

They roam around unlike any gang, as members can be seen patrolling the streets individually throughout Vice City. They will shoot at Sharks members at the mall and Vercetti Gang members if near Vercetti Estate. They will only shoot Tommy in self-defense or even if he shoots a bullet in any direction, as they see this as a use of force anyway. 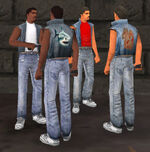 Also called Streetwannabes, the Sharks are a band of thugs who roam around the North Point Mall and Prawn Island. Their unnamed leader steals from Ricardo Diaz and is killed by Tommy in an airstrike, leaving the Sharks with no known leader.

Similarly to the PIG, they are not as important nor powerful as the other gangs, and are always killed by Tommy in the few storyline appearances they make.

They seem to be on bad terms with the Vice City Bikers as they stole Mitch Baker's motorcycle, and with Diaz' Gang due to their leader stealing from Ricardo. They were also ambushed by Tommy due to orders from Umberto Robina, suggesting they are also enemies of the Cubans.

They are not hostile to Tommy, even after he kills their leader and will only shoot in self defense or if hijacked They will always shoot against the PIG guards when one enters the mall.

The Vice City Triads are a Chinese gang that appears during the missions given in the Print Works.

They are heavily involved in the counterfeiting business, supplying the Counterfeit Syndicate with plates of currencies. They also run a shipping company at Viceport.

Although an important organization during the Print Works missions, the main mission concerning them is Spilling the Beans, in which Tommy assaults a ship to interrogate a Triad boss to figure out the location of their counterfeit plates shipment. The boss was protected by hired Patrol Invest Group security guards, however Tommy managed to reach him and complete his mission. It is unknown whether this was the main Triad boss or just a local leader.

As they only appear in one mission of the Print Works, they don't have a turf, in fact, no gang members appear at all, since they hired the Patrol Invest Group to protect the ship.

The Counterfeit Syndicate is a criminal organization based in Vice City that are mainly involved in the counterfeiting of currency.

Although they seem to be a big organization, they only appear once in the game during the Print Works mission "Hit the Courier" given by Earnest Kelly, in which the syndicate is expecting a courier to bring new plates created by the Vice City Triads. In the mission, Tommy Vercetti kills everyone on the site and steals the plates, beginning his own counterfeit operation in the Print Works.

They appear to be an all-female gang from what can be seen during the mission.

Since they only appear in one mission, they don't have a turf, thus being a minor gang unrelated to the main story. 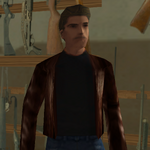 The Mexican Arms Dealers are a small gang located in Vice City.

They appear once in the story, during the mission given by Phil Cassidy, "Gun Runner", in which Phil asks Tommy to do him a favor after the bank heist in the mission "The Job" (in which Tommy asked Phil to participate). He asks him to attack the trucks with which the Mexicans are selling weapons. Once Tommy destroys the trucks and captures the weapon crates, he kills the rest of the gun runners. As they are not seen in any further missions, it is implied tbat their gang has been wiped out.

Their leader was a rival gun runner to Phil Cassidy named Pedro Garcia. During the mission, Tommy kills him, leaving them with no leader.

As they only appear in the one mission, they are a minor gang with no turf, however their character model does appear as a normal pedestrian which can be seen on the streets of Vice City.

Retrieved from "https://gta.fandom.com/wiki/Gangs_in_GTA_Vice_City?oldid=1286801"
Community content is available under CC-BY-SA unless otherwise noted.