Gang Wars is a side mission in The Lost and Damned.

To start a Gang War, the player must (using a bike) drive to a designated meeting point and then drive to the enemy's location. Clay, Terry, Jim and three non-storyline characters will assist the player during a battle.

By completing an increasing number of Gang Wars, the number of enemies you have to fight increases, and their weapons get stronger as well. You will have to develop different strategies to beat these missions. The more gang wars that you complete the more things you will have to look out for e.g.: more attention from cops and enemies using deadly weapons like explosives. In later Gang Wars, enemies can withstand large amounts of gunfire before dying but still die instantly with a single shot to the head. An accurate, long ranged weapon like the Carbine Rifle is recommended.

Members of the Lost MC

There are 24 members of Lost Brotherhood that can join Johnny's formation in Gang Wars, other than the usually present Jim Fitzgerald, Clay Simons, and Terry Thorpe. Each new member (up to three) rides on the backs of Jim, Clay, and Terry and aid the group in killing enemies. Each can be toughened up to increase their AI and upgrade their weapons, but each can also be killed in every gang warfare event. Once one dies, the next member takes his place, although if all of them died once, they will comeback again.

Here are their names:

Below lists are the enemy gangs, and all of the vehicles used by enemy gangs in the Gang Wars. Some are target vehicles that require the player to destroy rather than kill off the enemy gang.

Completing numbers of Gang Wars will reward Johnny with weapons which will spawn at either of his safehouses. 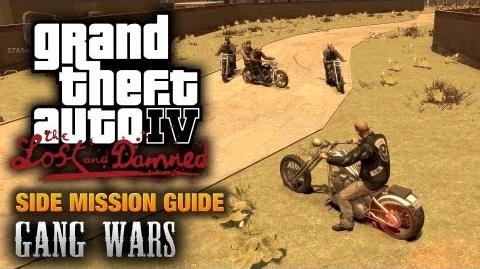 Retrieved from "https://gta.fandom.com/wiki/Gang_Warfare_in_The_Lost_and_Damned?oldid=1220004"
Community content is available under CC-BY-SA unless otherwise noted.